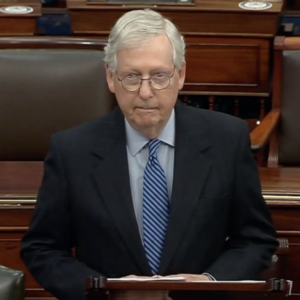 The following is taken from a March 16 speech by Senate Minority Leader Mitch McConnell (R-Ky.) from the floor of the Senate, in response to calls from Senate Democrats to eliminate the filibuster rule.

Mr. President, today I’d like to begin with a few quotations:

That was the current Democratic leader, Senator Schumer, in April of 2017, less than four years ago.

Here’s another quote. “What about the nuclear option, doing away with the filibuster? I can tell you that would be the end of the Senate as it was originally devised and created, going back to our founding fathers. We have to acknowledge our respect for the minority, and that is what the Senate tries to do in its composition and in its procedure.”

That was [Illinois Democrat] Senator Durbin in 2018, about three years ago.

A few years ago, 33 members of the Senate side signed a letter insisting that, “we preserve existing rules, practices, and traditions regarding legislation.” Now under pressure from the outside, many of our Democratic colleagues are abandoning their stated principles as fast as possible.

Yesterday, Senator Durbin said the filibuster is not a core principle but, “an offhanded clerical suggestion.” Now the framers designed the Senate to ensure that federal laws in our country earned broad enough buy-in to receive the lasting consent of the governed.

When President Trump pressed Republicans to kill the filibuster, our Democrat colleagues cried foul. And when our Republican majority stood on principle and refused to wreck the rules, our democratic colleagues happily used the filibuster themselves. In some cases, they blocked legislation like Senator Tim Scott’s police reform bill. In many other cases, democrats leveraged the existence of the filibuster to influence must-pass legislation long before it got to the floor.

People forget that the Senate’s 60-vote threshold is the only reason that any routine must-pass legislation is bipartisan except during divided government. Does anyone really believe the American people were voting for an entirely new system of government by electing Joe Biden to the White House and a 50-50 Senate?

There was no mandate to completely transform America by the American people on November 3. Some Democratic Senators seem to imagine this would be a tidy trade-off if they could just break the rules on a razor-thin majority, it might damage the institution, but then nothing would stand between them and their entire agenda, a new era of fast-track policymaking.

But anyone who really knows the Senate knows that’s not what would happen.

Nobody serving in this chamber can even begin to imagine what a completely scorched earth Senate would look like. I want our colleagues to imagine a world where every single task, every one of them, requires a physical quorum, and the vice president does not count in determining a quorum.

If the Democrats break the rules to kill rule 22 on a 50-50 basis, then we will use every other rule to make tens of millions of Americans’ voices heard. Perhaps the majority would come after the other rules next, perhaps this would just be the first domino of many, until the Senate ceased to be distinct from the house in any respect.

This chaos would be like a 100-car pileup, nothing moving.

The last time a Democrat leader was trying to start a nuclear exchange, I remember offering a warning. I said, my colleagues would regret it a lot sooner than they thought. In just a few years and a few Supreme Court vacancies later, many of our Democratic colleagues said publicly that they did.

Senate Republicans wouldn’t just erase every liberal change that hurt the country, we’d strengthen America with all kinds of conservative policies with zero input from the other side. So the pendulum would swing both ways, and it would swing hard.

My colleagues and I have repeatedly refused a sitting president to kill the Senate for instant gratification. Because becoming a U.S. Senator comes with higher duties than steamrolling any obstacle to short-term power. I meant it. Republicans meant it. Less than two months ago, two of our Democratic colleagues said they mean it, too.

If they keep their word, we have a bipartisan majority that can put principle first and keep the Senate safe.