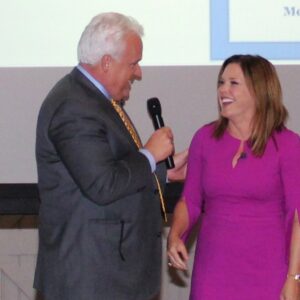 ‘We Call Him ‘Shrek:’ Fetterman a Popular Target at Montco GOP Dinner

Enthusiasm ran high among the 250 committee people, elected officials, and candidates at the Montgomery County Republican Committee’s Fall Dinner last week at the Normandy Farm Hotel in Blue Bell. The event both honored outgoing state Sen. Bob Mensch (R-Bucks/Montgomery/Berks), who is retiring, and gave the GOP faithful a message for the upcoming midterm elections.

“These two people are the hardest working people,” said public relations pro Alexandra Preate who moderated the event. “You can’t imagine phone calls at 2 o’clock in the morning or text messages. They never say no. They travel all around the country. They have a young family,” Preate said. 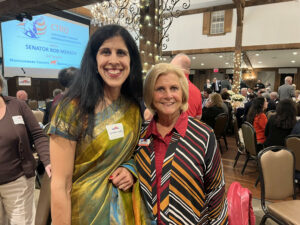 “Mercedes and I are 1,000 percent behind Doug Mastriano and 1,000 percent behind Dr. Oz,” Matt Schlapp, chair of the American Conservative Union, said. “Dr. Oz is a rare politician. He called us to say, ‘Can I take you to breakfast?’ He took us to the Royal Restaurant, which is kind of legendary in Alexandria (Virginia). He did something that Donald Trump did. He asked questions, and he didn’t talk. He listened.”

Usually, “politicians always talk the whole time until you think, ‘I’ve got to get out of here. My ears are going to bleed pretty soon.’ Not Dr. Oz.

“The other thing he did, he’s a famous guy and he was so nice to people. People were pouring out of the kitchen. Everybody wanted to meet Dr. Oz. He’s exactly what we need in our politics today.”

“America is under attack by a virus that wants to undermine her. And I think we all get it. We’ve woken up from our slumber and our stupor. And I think Pennsylvania is going to lead the way,” he said.

Schlapp, a regular on Fox News and other conservative media outlets also turned his sights on the Democrats.

“I often think when I walk our city streets, especially Washington, D.C. with double-digit increases in murder, violent crime ever since they… started to say that cops were bad. I’ve often said, it doesn’t make much sense that the Democrats say, ‘I have a policy solution. Let’s legalize all drugs.’”

Preate cut in, “We call him Shrek, sometimes.”

“The idea that just listening to him, the idea of legalizing all drugs seems insane,” he said. “I feel like we’re in an insane moment.”

Mercedes Schlapp said she believed GOP success in November centers around the Keystone State. “Pennsylvania is the epicenter of this red wave. We are going to make Pennsylvania red again. It will happen in our lifetime, I promise you. People are fed up.”

And, she argued, it is not just because of inflation.

“I know we talk about the economy that’s putting so much pressure on families, but it is these cultural issues,” she said. “It is the fact that you have these schools, these leftists pushing sex changes at the age of 5 or 6, that they are normalizing the use of puberty blockers for our children. This is disgusting, and this is what we have to stop. And I have seen parents, the ones that didn’t want to get involved in politics, have had to rise up. And I see that so much here in Pennsylvania where moms have said, ‘I’ve never done that before, but I’m going to get active, and I’m going to make sure we make a difference in our local school boards.’” 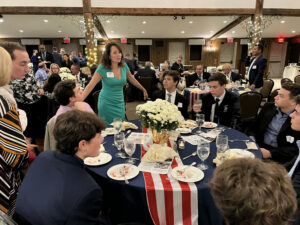 There were also kind words from Havey for guest of honor state Sen. Bob Mensch.

Mensch brought performance-based budget to the state, transforming the budgeting process, so every line item and department is reviewed yearly “like a business,” Havey said.

“His second huge accomplishment, in my view, you know his wife passed after fighting a really long battle with cancer,” she said. “And Bob made sure in the legislature over the last many years that women with breast cancer have the testing and insurance coverage that they need,” she said. “He really impacted thousands of women across this commonwealth, twice receiving the prestigious Pink Ribbon Award, the only person in Pennsylvania to get the award twice from the Pennsylvania Breast Cancer Coalition.”

She said Mensch has also been “a true friend” to many Republicans. He mentored her, helped her become the party chair, and helped many candidates.

Mensch, who served for 16 years in the legislature, thanked the audience for supporting him and supporting the Montgomery County Republicans.

“I truly appreciate the recognition,” he said. “We need candidates to run and run and run to get elected. We have some great candidates. We can’t just cede all of this to the Democrats.”

“There’s been a lot of talk about (Democratic Senate candidate John) Fetterman here,” said Mensch. “I worked with Fetterman for four years. As the lieutenant governor, your biggest responsibility is to run the Senate. You’re the president of the Senate. It’s scripted. Literally, and to his left is the parliamentarian. If there’s any question, she’s there for his help, and she’s dynamite. And he can’t read the script. He can’t do the job. So, what does that say? He says he transformed the job of lieutenant governor. If you can’t do the job, he’s transformed it.”

Havey, who joked about living in the very Democratic town of Lower Merion, welcomed a group of Lower Merion High School students who are members of a student Conservative Club.

Senior Andrew Coyne, 17, said he founded the club last year because “conservatives needed a space to talk about their opinions without being called racist. Lower Merion High School always talks about diversity and inclusion but not so much diversity of thought.”