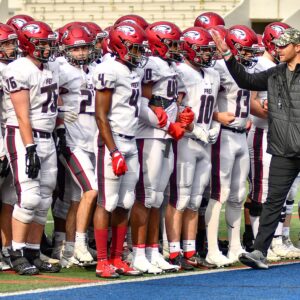 As the high school football state championships get underway, an old controversy is rising again.

For years, the debate has raged on advantages some schools may have in the Pennsylvania Interscholastic Athletic Association, PIAA.

Those that are public have a select pool of athletes to choose from within their district boundaries. Meanwhile, private schools, including those in the Philadelphia Catholic League, PCL, don’t have to follow set boundaries and therefore have a greater batch of players to choose from.

Some allege private schools use their lack of boundaries to their advantage to recruit and assemble the best teams possible, while public schools are left only with who they can get within their boundaries.

The debate used to be between public schools, according to David Mika, editor-in-chief and owner of EasternPAFootball.com. They’d accuse each other of having students move into their districts for athletic purposes.

“This goes back before the PCL was even involved in the playoffs,” which started in 2008, he said.

But the practice is not allowed by PIAA rules and is now what many private schools are being accused of.  And it’s sparking a debate about what to do about it once again.

The PIAA does enforce its no recruiting rule sometimes. Most recently in a case against Bishop McCort Catholic High School, a PIAA appeals board upheld a ruling that found the wrestling program guilty of recruitment. The school’s argument that these were academically-focused transfers wasn’t a strong enough defense for the board.

But Phillips said he thinks the enforcement of the rules depends on one’s connections.

“The people who had the connections were the ones who were able to penalize” Bishop McCort, he believes. “There were a lot of people behind the scenes who did not like Bishop McCort.”

The latest controversy though is arising with football and specifically a game between Garnet Valley and St. Joe’s Prep. Garnet Valley, a public school, was undefeated this year until they went down to Prep last Saturday.

One local sports reporter noted on Twitter that “through six quarters, Strath Haven and Garnet Valley,” two public schools, “have been outscored 71-7 in the state semifinals by teams that recruit.”

For Ed Palmer, a statistician for the PCL, that argument isn’t convincing.

“Public schools beat private schools all the time,” Palmer said.  This topic only arises when that doesn’t happen. “It’s a lot of sour grapes when they lose.”

As for Prep, Palmer put up a strong defense of them but did not deny the fact they use the recruitment practice.

“Prep is on a nice little roll right now, they do get their hands on a lot of good players, but they’re well-coached, and they make sacrifices.”

Meanwhile, Mika said the idea that anyone is “going door to door recruiting” was not true. “The school recruits itself.” In the case of Prep, a strong academic program in addition to a good football team draws students there, according to Mika, instead of a recruiter making a personal case to a student.

Phillips thinks it’s difficult to tell who is actually doing recruiting, and who is simply getting lucky with their transfers.

“It seems like at the end of the day it’s so arbitrary and inconsistent with how the rules are actually applied,” he said. “Who really knows anybody’s motivations?”

Palmer even thinks there are advantages public schools have over private ones. Often public schools have facilities onsite or have larger class sizes to pull athletes from. He even argues that being within boundaries is helpful as it means athletes don’t have to go far for school or practice.

Even while this debate is brought up once again, it doesn’t seem like it’s going to disappear any time soon. But the question is will the PIAA act to combat the complaints? Mika doesn’t think they will.

“Are they ever going to say in the playoffs [a student] can’t play cause they’re from another state? I don’t think so.” He added though he could see them taking other steps like creating a new division for schools like Prep. But that’s all speculation.

And yet this whole debate may appear more overblown than it really is, especially among players.

“I don’t think kids who play the sport care as much,” said Palmer. “I think most coaches welcome the competition, I think a lot of it is parents and adults from [the] community who get upset that teams lost.”