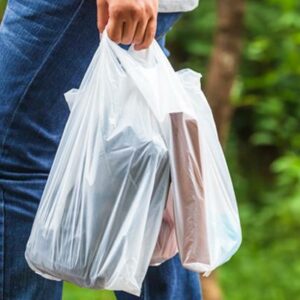 LOGOMASINI: If You Care about Wildlife, Oppose Plastics Bans

Ask an environmentalist how to stop plastics litter and ocean pollution and you’ll likely get a litany of proposed regulations and bans on plastic straws to grocery bags. Waste mismanagement and litter are legitimate concerns, but banning synthetic plastics in the hope of getting “natural” alternatives would do more harm than good to the environment.

Although counter-intuitive to some, synthetic plastics have reduced serious environmental impacts associated with harvesting similar renewable resources from wildlife and the environment in general. As environmental advocate Michael Shellenberger points outs in his book Apocalypse Never: Why Environmental Alarmism Hurts Us All,“We must overcome the instinct to see natural products as superior to artificial ones.”

Consider the fact that many products—combs, jewelry, instrument keys, billiard balls, and other useful items—were once made with natural plastics derived from elephant tusks, tortoise shells, and animal bones. As the human population grew, so did demand for such materials, and wildlife populations suffered. In fact, Shellenberger credits the discovery of plastics for helping prevent the extinction of the hawksbill sea turtle, of which he said nine million had been killed since 1844.

Elephants, too, might have disappeared without synthetic plastic replacements for ivory. Ivory demand soared at the beginning of the 20th century, particularly because of its use for billiard balls. In Plastic: The Making of a Synthetic Century, Stephen Fenichell noted that only one in 50 tusks presented the quality needed to make a single billiard ball, placing serious pressure on elephant populations.

During the 1860s, ivory prices were so high that one billiard ball retailer ran newspaper ads around the nation offering a $10,000 reward to anyone who could find a suitable substitute. Chemist Leo Baekeland eventually found one, mixing formaldehyde and phenol to make a plastic he dubbed Bakelite (considerably less flammable than celluloid, another early plastic).

Bakelite reduced the need for ivory as well as other natural plastics from tortoises and other horned animals. In addition to billiard balls, it proved valuable for making many products including wire insulation and consumer products like telephones, radios, clocks, combs, jewelry, and much more.

Along with other synthetic plastics discovered later, Bakelite not only reduced the need to hunt wild animals, it helped free land for wildlife habitat and biodiversity. Ultimately, once mankind learned to make plastics with chemicals—particularly the byproducts of the fossil fuel industry—less land was needed for farming.

If the world had to rely solely on natural rubber, for example, we would need far more large rubber plantations. Fortunately, during the 1930s, DuPont company scientists developed a commercially successful synthetic rubber, which was essential to meet demand for tires amidst a growing automobile industry among many other things.

In fact, were it not for the rapid development of the synthetic rubber industry and its contribution to the production of critical equipment, such as tanks, battleships, and telegraphs, the United States would likely have lost World War II. At the time, much of the world’s natural rubber tree supply was behind enemy lines in Southeast Asia.

Similarly, synthetic textiles like vinyl, nylon, acrylic fabrics, and polyester now supplement nature-derived materials like leather, cotton, silk, wool, and jute. Today, about 60 percent of the world’s textile needs are met with synthetic products, according to researcher Indur Goklany. “Because of the widespread use of synthetic fibers,” he noted in a paper for the Cato Institute, “skins and furs are widely regarded as outmoded, unfashionable, and unnecessary. This may be partly responsible for the rebound of beavers and other wildlife.”

Even synthetic wood finishers—particularly polyurethane—reduce the need for farming and energy usage related to transportation from far-off places. The “renewable” and “natural” alternative requires special forests in India and Asia, where “lac bugs” secrete resins necessary to make shellac.

Consider what the planet would look like if all plastics used for these many consumer products had to be sourced from renewable resources. We would need a lot of land to expand rubber plantations, forests of trees that host lac bugs, mulberry trees for silkworm habitats, cotton farms, cattle and sheep ranches, and much more.

Of course, we need to address litter and ocean pollution, but we should focus on the source of the problem—mismanagement of trash—not solutions that could place undue stress on wildlife populations.

Angela Logomasini is a senior fellow with the Competitive Enterprise Institute, a free market public policy organization based in Washington, D.C.