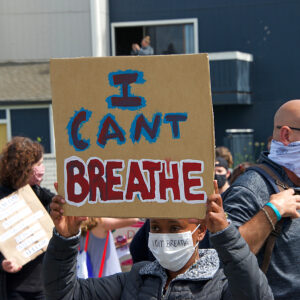 A jury found former Minneapolis police officer Derek Chauvin guilty late Tuesday afternoon of two counts of murder and one count of manslaughter after Chauvin put his knee on Floyd’s neck for more than nine minutes, an act that left Floyd lifeless on a city street.

The release of a video of Floyd’s May 25, 2020 death shook the country and many cities erupted in riots — including Philadelphia and its environs — as Black Lives Matter protesters and others vented their spleen.

Shortly after the verdict was handed down, area officials shared their reactions with Delaware Valley Journal.

“The nation had its heart broken last summer, and citizens of color saw an injustice that was both familiar yet traumatizing. Today a reckoning has occurred,” Bucks County Commissioners Chair Diane Ellis-Marseglia said.  “From here, we need to become one nation and find our way to heal and change our system into one that embraces and protects everyone.  I am honored to be part of a generation that will be able to work to correct inequities.  I am praying that tonight we all take a breath and a moment to pray.”

Montgomery County Commissioners Chair Val Arkoosh, a Democrat who is running for the U.S. Senate said via Twitter, “This verdict is a step toward justice, but it doesn’t change the fact that George Floyd should still be alive today. Now, we have to do the hard work of preventing these tragedies from occurring in the first place by confronting the institutional racism that’s caused them.”

“I have no quarrel with the jury’s verdict convicting Chauvin of murdering George Floyd,” said Bucks County District Attorney Matt Weintraub, when asked to comment. “I am relieved that justice has been served.”

Also on Twitter, U.S. Rep.  Madeleine Dean (D-4) said, “Derek Chauvin acted without regard for the life — the humanity — of George Floyd. Thinking of the Floyd family, his brother Philonese, and his daughter Gianna. May God bless them and may this conviction offer a measure of justice — and some measure of peace. #BlackLivesMatter”

And Congressman Brian Fitzpatrick (R-1) tweeted, “The American justice system works. Today, due process was followed and justice was served.”

Congresswoman Mary Gay Scanlon (D-5) released a statement on her website under a Black Lives Matter graphic. She wrote, “Like millions of Americans, I am feeling a small sense of relief today following the guilty verdict in the trial of Derek Chauvin. Clear video evidence and expert and eyewitness testimony proved what was obvious to a watching world since last May—Derek Chauvin murdered George Floyd. Today, justice was served.

“Over the past year, our country has begun a great reckoning sparked by the horrific killing of George Floyd in Minneapolis. I remain committed to confronting the harsh truths about law enforcement practices in our country that have allowed police violence against communities of color, especially Black individuals, to persist for far too long,” Scanlon continued. “And I will do everything in my power as an elected representative in Congress to push for meaningful reforms. If we truly believe Black Lives Matter, we must change law enforcement in the United States.”

She called on the Senate to pass the George Floyd Justice in Policing Act, which has already passed the House.

Both Dean and Scanlon voted last week to launch a commission to look into paying reparations for slavery.

Rep. Chrissy Houlahan (D-6) released a statement as well, saying,  “Around this country and across the globe, people watched with horror as Derek Chauvin knelt on George Floyd’s neck for nine minutes and 29 seconds,” said Houlahan. “Today, the jury came back with what I believe was the only acceptable verdict – Derek Chauvin is guilty of murder.

“And while I am grateful for this verdict, I hesitate to call it justice,” she added.

“Justice would be a society where Black people can live their lives safely and free from fear of police violence, free from being targeted by those whose job it is to protect,” said Houlahan. “In a just America, George Floyd would be alive today.”

She also called on the Senate to pass the George Floyd Justice in Policing Act and noted how difficult it has been for Floyd’s family to endure the past year since his death.

“We owe George Floyd, his family and the entire Black community a resounding answer to that call for justice, to that call for equity,” Houlahan said.  As the trial was about to begin, the City of Minneapolis settled a lawsuit with Floyd’s family for $27 million.

Meanwhile, President Joe Biden met with Floyd’s family on Monday. Afterward the meeting but before the verdict was returned, Biden said, “I’m praying the verdict is the right verdict, which is, I think it’s overwhelming in my view,” and added, “I wouldn’t say that unless the jury was sequestered.”

A few days ago, California Democratic Congresswoman Maxine Waters had  traveled to Minneapolis and spoke to a crowd there to “stay on the street” and “get more confrontational.”

Her remarks prompted Chauvin’s defense attorney to ask for a mistrial, a motion Judge Peter Cahill denied. However, Cahill said Waters remarks might become the basis for an appeal.  On Tuesday a motion brought by Republican House Minority Leader Kevin McCarthy to censure Waters was blocked by her fellow Democrats in a party-line vote.