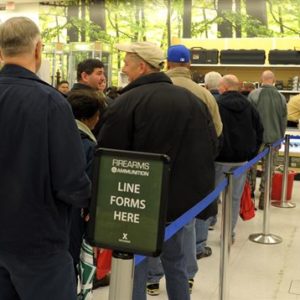 Is all hell about to break loose in Philadelphia?

Hundreds of Philly residents lined up outside gun shops last week after Police Commissioner Danielle Outlaw announced that officers in the city won’t be booking people for lesser crimes during the coronavirus pandemic.

And hundreds of other Philadelphia residents blasted the new chief on Twitter.

The media had published the memo to officers listing the crimes for which criminals would be issued a summons, not held in jail. They include: all narcotics offenses, theft from persons, retail theft, theft from auto, burglary, vandalism, all bench warrants, stolen auto, economic crimes (bad checks, fraud) and prostitution.

Officers, according to the memo, are only to hold criminals long enough to confirm their identity and issue them a “summons to appear” at a later date.

“But they’ll be released to commit again. That’s the fact. Kick in a door to rob a home, get arrested, get released, kick in a door, etc. I don’t feel safe,” another person tweeted.

“Why any change in policy?” another Twitter user asked. “What is the benefit to society and doesn’t this just help incite further crime? I understand protecting our officers but I don’t think the answer is allowing criminals to wander freely.”

“Then I guess our tax dollars don’t need to be used to pay them, either. We pay them to PROTECT AND SERVE,” wrote another, followed by four exploding head emojis. 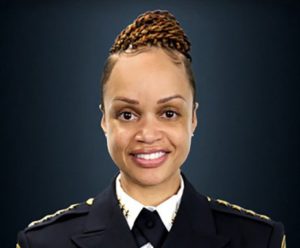 Chief Outlaw recently took over as the first black, female police chief in Philadelphia, in charge of a department of 6,500 officers. She was hired away from Portland, where she was police chief during violent Antifa protests. She started her career in Oakland, California, where she grew up and where she said in a 2018 TED talk that the police had taken away someone she loved “very deeply.” Her goal in police work, she said, has been to “put humanity in authority.”

One of her first actions in Philadelphia, remarkably, was to change the dress code so that police officers can wear stylish nail polish. She noted that a few people had pointed out in her first days on the job that her black nail polish was not in compliance with department policy.

The Philadelphia Inquirer wrote that although the action might have seemed narrow, “it reflects the type of broader change that she [Outlaw] believes is needed in policing.”

Chief Outlaw’s announcement that police wouldn’t be arresting people for all offenses committed in the next two weeks follows the governor’s order that all non-essential businesses in the city close. The mayor’s office told the media this week that “non-essential” includes gun stores.

Outlaw also followed the urging of Philadelphia District Attorney Larry Krasner that people not be arrested for lesser offenses during the coronavirus crisis. Krasner ran on a “no bail” platform, with the help of big contributions from a George Soros-linked PAC. Last summer, U.S. Attorney Bill McSwain, blasted Krasner at a press conference for his “routine downgrading of violent crimes” and for championing a “disrespect for law enforcement” in the city that he said was igniting violence against police.

But Krasner is apparently unfazed. On Friday, he called for thousands of criminals to be released from jails, saying it was necessary to prevent the coronavirus, known as COVID-19, from spreading.

“Jails and prisons are already dirty, crowded places. The elected and appointed leaders of the Commonwealth must protect us all by moving forward with safe and timely release of people from corrections facilities who are unlikely to endanger the public,” Krasner said in a statement.

He went on to say he has long disagreed with those who support measures to “keep their prisons full,” and said many criminals should be released and prison population reduced “for the sake of public health.”

As of Monday, there were no reported cases of coronavirus in prisons or jails in Philadelphia.