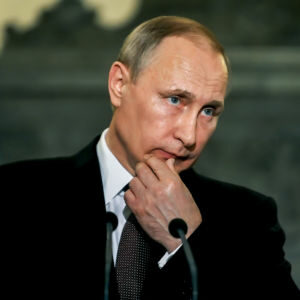 LEACH: Our Love of Life May Disadvantage the U.S. Against Russia’s Putin

A basic rule of human interaction is that whenever there is a stand-off, the side which does not fear possible consequences has a huge advantage. If I am less afraid of losing a deal, or getting punched in the nose than you are, the odds are overwhelming that I will prevail in whatever matter we are involved in.

This fundamental precept is nowhere truer than in the case of nuclear brinkmanship.

In a world where more than one nation has potentially planet-destroying nuclear weapons, the bomb is never supposed to be used. The entire basis of our nuclear strategy since 1953 when Russia (then the Soviet Union) joined us as an atomic power is “Mutually Assured Destruction” (MAD). Essentially, this doctrine holds that if you launch your nuclear weapons to destroy me, I’ll launch mine to destroy you. Nobody wins. Everybody loses. This doctrine has prevented a third world war for almost 70 years and turned atomic bombs from weapons into a concept which largely kept the peace.

The reason MAD has been effective is because it is credible. Nobody really doubted that a barrage of Intercontinental Ballistic Missiles would be met in kind. That’s why the US and the USSR never waged considered bilateral war. (The one exception was the Cuban Missile Crisis of 1962. But that was quickly deescalated). Instead of fighting each other, the superpowers waged proxy wars in the less developed world. They were ugly and deadly, but never existentially threatening.

The problem we have now, as the conflict in Ukraine unfolds, is that the underlying theory of MAD doesn’t work in these circumstances. Sure, if Russia tried to attack us with nuclear weapons, we would fully retaliate. I believe that. I’m fairly certain that Vladimir Putin believes that. But knowing that a nuclear exchange would end life as we know it for all of us raises some very troubling questions about how we handle the current predicament.

Imagine this scenario: The war in Ukraine has gone badly for the Russians thus far. It will likely continue to go badly or maybe get even worse. Perhaps Kyiv simply won’t fall, the cost in Russian lives continues to grow and popular discontent in Russia rises. Putin then decides that he is no longer willing to accept the increasing risk to his rule and drops a nuclear bomb on Kyiv.

At this point, what should Joe Biden do? What would you do if you were president?

Our options are quite limited. We, or NATO, could retaliate, but against whom? Russia dropped the bomb. There is no third country we could strike. The only target which makes logical or moral sense is Russia.

We could launch an all-out nuclear attack. But under the doctrine of Mutually Assured Destruction we helped create, we would know that would mean the certain death of many millions of American citizens. We could launch a single strike against one Russian city, but it seems very unlikely that Putin would accept that and let it end there.

The other option is that we could do nothing. Sure, we could impose some additional sanctions, etc. But we’ve already done much of what we can do in that regard. And such a response would seem puny considering the massive crime against humanity such an action by the Russians would represent. Anything short of a massive military retaliation would rightly be perceived as feckless. And what kind of precedent would it set if we allow an unprovoked nuclear assault to go unanswered? But, on the other hand, are we willing to risk our lives, the lives of our families and friends, and life as we know it to avenge Kyiv?

One could argue that Russia faces the same dilemma that we do. But here is where my original point becomes relevant. I think that Putin is far more willing to risk a life-ending nuclear confrontation than Joe Biden or Americans in general are. His behavior suggests he isn’t obsessively concerned with the lives of his fellow Russians. And while most autocrats are egomaniacs who can at least be counted on to be self-protective, I’m not sure I’d bet our planet’s future on Putin backing down, even if his own life were at risk.

We seem to be in an untenable position. Mutually assured destruction is simply not designed to prevent limited nuclear attacks on third countries. In fact, perversely, it actually makes such attacks more likely because it severely limits options for retaliation.

I obviously don’t know what we would do in the unlikely, but plausible scenario I’ve laid out. But we shouldn’t be making these decisions on the fly. Hopefully, we are debating these things at the highest levels now, so that we are prepared if the worst happens.

Daylin Leach served in the Pennsylvania House and Senate from 2002-2020. He was the author and prime-sponsor of the Pennsylvania Medical Marijuana Law. He is currently the Political Director of Cannabis Action Project and lives in Upper Merion with his wife Jennifer, and, when they are home from college, children Brennan and Justin.