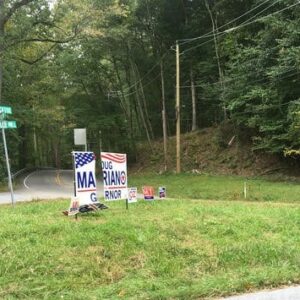 For years, Geoff Gamble allowed the Republican Party to put campaign signs on a triangle of land he owns at the busy intersection of Kaolin, Chandler’s Mill, and Bucktow roads in Kennett Township.

This year there was a problem. 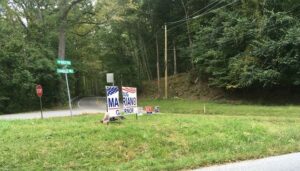 “It was an expensive sign,” said Gamble, a Republican and a Kennett Township supervisor. “For 36 years we’ve let the Republicans put signs there. The Democrats usually put their signs across the street. The only other time there was trouble was when former President Trump ran.

“People who didn’t like him destroyed the sign once or twice but it wasn’t a huge sign,” he said.  And once, one of Gamble’s supporters took down a sign that belonged to an opponent and he told her to put it back. “I find that reprehensible,” he said.

“That’s just not the way you convince the public to vote for you,” said Gamble.

However, township police checked and found the sign did not block drivers’ views and permitted it to stay on the triangle.

Gamble wrote to Mutuszak, “So I guess that if you cannot get rid of signs lawfully, the next action in your playbook is to have one of your associates vandalize it?  Whoever did this is guilty of trespass and destruction of private property. I consider such activity shameful and juvenile, and it contributes to the crime and lawlessness currently plaguing our commonwealth and our country.”

In an email to Gamble, Matuszak denied that he caused the vandalism.

“I had nothing to do with this wanton example of vandalism.  Maybe there shouldn’t have been a large TARGET on the banner, perhaps? Exercising my First Amendment Rights.”

Matuszak did not respond to the Delaware Valley Journal’s request for comment.

Borton said that when the GOP replaces the sign, it will include lights and cameras to catch anyone who might try to vandalize it again.

In the meantime, Gamble said, Democrats had the audacity to put signs for Josh Shapiro and John Fetterman in the same spot that once held the damaged Doug Mastriano sign. He removed them.