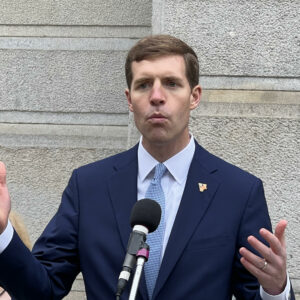 The leaked U.S. Supreme Court decision potentially overturning Roe v. Wade shocked the country, and those shockwaves are certainly being felt in Pennsylvania. But some voters may be shocked, or at least surprised, by what the reaction to the leaked opinion has revealed about some candidates in the state’s May 17 primaries.

At a press event Wednesday afternoon, for example, Congressman Conor Lamb reiterated his support for abortion without restriction throughout the entire pregnancy up to the moment of birth.

Lamb, a Democrat running for the U.S. Senate, is often portrayed as a moderate. In the immediate aftermath of the leak of Justice Samuel Alito’s draft opinion, Lamb said, “I think the right to choose is a right all the way through pregnancy.”

During Wednesday’s presser, Lamb stood by that statement. “What I actually said is, I believe a right is a right all throughout pregnancy,” Lamb told Delaware Valley Journal.

“And there’s a fair amount of misinformation about what that means as far as the moment of birth. In the last trimester, it is extremely rare for anyone to have an abortion. It’s about one percent of cases. And I think that those cases are well-handled by medical ethics and the way that doctors are trained to make decisions, along with their patients. This whole concept of abortions right before the moment of birth is a fiction.”

Last September, Lamb voted for the “Women’s Health Protection Act,” which would override every state law restricting abortion and mandate Lamb’s no-restrictions stance in all 50 states. Lamb was joined by all of his fellow Pennsylvania Democrats, including Delaware Valley Reps. Madeleine Dean, Chrissy Houlahan and Mary Gay Scanlon.

This position is far outside the mainstream, according to polls. Gallup polling has consistently found about 80 percent of Americans believe abortion should be illegal in the last three months of pregnancy. However, it is a position shared by Lamb’s leading opponent, Lt. Gov. John Fetterman.

Asked if there are any limits on abortion he would find appropriate,” Fetterman said, “I don’t believe so, no.” Soon after he tweeted, “Let’s be clear: The right to an abortion is sacred.”

When another reporter asked whether the leaked Supreme Court decision changes the political landscape, Lamb said, “I think obviously what has changed is, the threat is real now,” said Lamb. “People have seen it in print and obviously the print is much more shocking than I think I even expected, in that they want to do a full overturning of this decision. And so that makes people scared of what could lie in store for us in the future, with the specific right to seek an abortion and with a lot of variables and rights.

“So, I’ve noticed in the primary, it’s getting people in a very practical frame of mind about who can win the election in any circumstances. In the general election, I’d expect to see higher participation from women.”

But the general election is months away and some political insiders believe abortion will fade as an issue for many voters.

“Most voters will still be mainly focused on inflation and other pocketbook issues in the fall,” said Christopher Nicholas of Eagle Consulting Group, a veteran Republican consultant.

“The abortion issue in Pennsylvania cuts both ways as there are both pro-choice Republicans as well as pro-life Democrats,” he added.

Political strategist Albert Eisenberg said, “Democrats will see increased turnout from college-educated women particularly, and it could induce young liberals to show up, but they should be careful about overplaying their hand on abortion issues. There are a lot of pro-life, moderate, and conservative Democrats who are drifting away from the party, particularly Black and Hispanic voters, and this could easily backfire and alienate voters they absolutely cannot afford to lose. Will the GOP realize this and take advantage?”

However, Nina Ahmad, president of the Pennsylvania chapter president of the National Organization for Women, said the high court’s decision on Roe might give people “urgency” to vote for Lamb. Her group endorsed Lamb because of his voting record and because they think he can win in November.

“This one (Lamb) is the only one who has a record and has delivered. (Lt. Gov. John) Fetterman hasn’t done anything for women in his time in office,” said Ahmad.

“As you know things are happening in our nation that are putting women’s rights in peril,” said Ahmad. “You saw the leaked document that came out about the Supreme Court decision and that has galvanized people all over this country, as it should.”

National Organization for Women President Christian Nunes said, “When we saw Justice (Samuel) Alito’s leaked draft of this decision and how detrimental this would be to women…not just women, but to everyone. A lot of times when we think about reproductive justice and access to care and abortion, we think it only applies to women but it doesn’t. It affects all of us.”

“When we read the language in the draft, I don’t know about you all but I heard Jim Crow everywhere, right?

Lamb said, “If you look at Alito’s original draft opinion that’s out there, it reflects this view, this backward-looking view that judges like him often have about what was in the Constitution when the country was founded and what life was like back then. Well, that’s the important difference between me and him, in terms of how we see the law and how we see our duty to protect and serve the public.”

“At that time our society was very different and many people standing here would not have had anything like the same rights and the ability to make a life for themselves that they have now…I am not backward-looking. I’m forward-looking.”

Even though there are only two weeks until the primary, Lamb said, “a lot of people aren’t following it that closely.” But the Roe decision might change that, he added.

And Lamb said he also believes he is more electable than Fetterman, who is the frontrunner.

“What I’m trying to do is tell people about my own record of success,” said Lamb. “I’m not trying to tell people the traits I have are somehow superior to everyone else’s. I’m just telling you, I have in fact won in Republican districts three times in a row and that is something unique among the candidates. For both of the other two (candidates) they have only been in competitive primaries among Democrats. And the day after our nomination, you have to step out into a larger world and engage with voters, Independents, and even moderate Republicans to win in this state. And I know how to do exactly that.”