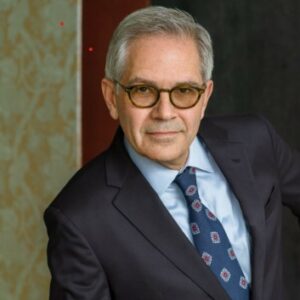 Philadelphia District Attorney Larry Krasner may be a darling of Pennsylvania progressives and police reform activists, but he tells Delaware Valley Journal there’s a line he’s not prepared to cross:

“I have never been a fan of the phrase ‘defund the police,’” said Krasner. “It’s confusing. I don’t think it’s very clear.”

It’s one of the few places where the outspoken liberal has broken with the progressive left. His willingness to make waves has earned him enemies, a primary challenge — and the attention of TV producers. Krasner is the subject of an eight-part PBS documentary “Philly D.A.”

Krasner gave unprecedented access to filmmakers Ted Passon, Yoni Brook, and Nicole Salazar, but he had no editorial control of the film and neither funded it nor will benefit financially from it. Asked about the presence of the camera crew at what would normally be closed-door meetings, Krasner said there were many times when the filmmakers were escorted out when sensitive matters were discussed.

But for many Philadelphia residents, the top law enforcement issue isn’t progressive politics but soaring crime. Homicide rates in the city have been rising since Krasner took office. The number of murders rose 40 percent last year alone, leaving 499 people dead, including many children. It was the highest number of homicides since 1990.

And the city is on track to have another high homicide year in 2021. The majority of those killed have been African Americans, a constituency that supported Krasner in large numbers in his previous election.

Krasner, 60, argued Philadelphia’s numbers should be put in a national context, noting homicides rose in all major cities last year, in large part due to the pandemic. And, he added, Philadelphia’s 40 percent ranks it in the middle of the 34 largest cities. Nationwide, homicides were up 18 percent, while some cities saw a 106 percent increase.

“It is a heartbreakingly terrible situation in terms of gun violence, in not only Philadelphia, but every other city,” he said. And, he says, they all share the same cause: COVID-19.

At the height of the pandemic “the social fabric of prevention for young people” disappeared, Krasner said. Youth sports shut down, community centers and libraries closed, art programs, swimming pools, theaters, and churches were closed. And the courts were also closed. Probation and parole officers spoke with their charges over the phone, rather than going out in person to make sure they were doing what they were supposed to do, he said.

Krasner’s anti-crime strategy calls for the city to invest in education, lowering class size in schools, hiring more school counselors and school nurses, he said. He also plans to implement a restorative justice program put on hold by the pandemic. Under his proposal, youthful offenders, victims, and mediators would meet and come to an agreement.  He gave an example of a youth arrested for a crime but who, instead of being prosecuted, uses his artistic skills to paint a picture for the victim, promises to go to school, and enters a mentoring program.

Krasner also kept his campaign promise to end cash bail for 25 minor offenses, including prostitution. But, he said, his office still recommends high bail for crimes like murder or aggravated sexual assault — a stance he claims has brought him criticism from the left.

These are the policies, the “Philly D.A.” documentary makes clear, that helped sweep Krasner into office. Soon after being sworn in, he fired 31 longtime assistant D.A.s and other staffers. “The coach gets to pick the team,” he said in the film. One of those fired ADAs, Carlos Vega, is now running against him in the Democratic primary.

Vega has promised to enforce gun laws, stand up for crime victims, and root out racial and financial inequity in the justice system. He notes that while arrests for gun crimes have risen under Krasner, their odds of getting convicted in court have plunged from 63 percent in 2017 to 49 percent today.

Vega has the backing of the powerful Fraternal Order of Police and its president, John McNesby, who remains a fierce Krasner foe. The FOP has given $25,000 to Vega’s campaign and is fielding soft ice cream trucks in a get out the vote effort that claims Krasner is “soft on crime,” according to The Philadelphia Inquirer.

Krasner’s also been hit by a letter signed by 153 former prosecutors and assistant district attorneys asking the public to support Vega.

Krasner dismissed the letter as sour grapes from people that he had fired, their relatives, attorneys for the FOP, and others with grudges against him. Meanwhile, his own employees are barred by city law from writing a letter saying that he is a “great guy,” he said.

And as for the statistics on increased gun charges being filed but fewer defendants convicted, Krasner blamed the circumstances of cases that are not provable “beyond a reasonable doubt,” giving an example of five people in a car with a gun in the trunk. “You have to look at these on a case-by-case basis,” Krasner said.

Philadelphia’s D.A. may be a TV star, but he’s struggling for support among Democrats here at home. Mayor Jim Kenney has avoided answering when asked by reporters whether he endorses Krasner’s re-election bid. The city’s Democratic Party is also sitting on the sidelines.

Krasner said “centrist Democrats” didn’t endorse him the last time around and even The Philadephia Inquirer endorsed his Republican opponent, he added, sounding incredulous. And just like the last time, Krasner is not aiming for the support of the mainstream Democrats.  He believes he has “massive grassroots support.”

“We won with more votes than any D.A. candidate in the last 20 years,” he said.