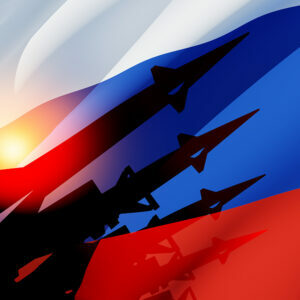 KING: The Threat of Nuclear War and the License It Has Given Putin

History isn’t short of people to blame. You could say of the present world crisis that it was former president Barack Obama’s fault for not getting tougher with Russian president Vladimir Putin in Syria. You could blame former president Donald Trump for giving Putin a sense of entitlement and for undermining NATO, seeing it as a financial play. You could blame former German chancellor Angela Merkel for encouraging Russian gas imports, shutting out the nuclear energy option.

You could, of course, blame President Biden for explicitly telling Putin, and the world, what the United States wouldn’t do if he invaded Ukraine. And you could blame Biden and NATO for dribbling vital military aid to Ukraine over the first devastating months of the Russian invasion.

If you want to continue, you could blame the world’s military strategists for believing that Russia, after the fall of communism, had changed. You could, perhaps, blame NATO itself, for expanding its reach to the former Soviet republics of Estonia, Lithuania and Latvia.

Putin is unequivocally the one to blame. He is the one who wants to remake Russia in the image of the imperial tsars. It is a flawed scheme but a real one.

As the world grapples with the reality of Putin, the past informs but it doesn’t instruct. If NATO were to engage Russia with conventional forces, it would triumph. That is one lesson of Ukraine. Russian military forces are woefully inefficient, even incompetent.

Would it were that simple.

The beast in the room, the feared monster, the threat that hangs over the whole world is nuclear war. It is the clear-and-present danger. It shapes our handling of Russia and will shape our response to China, if and when it invades Taiwan.

Nuclear war avoidance is again dominating the world in ways we had nearly forgotten. Will Russia — a caged, fierce bear — resort to nuclear, and how much nuclear to what effect against which targets?

The United States and the Soviet Union reached a modus vivendi: mutual assured destruction (MAD), which kept the peace even as nuclear armaments proliferated and stockpiles grew exponentially. Is that still the option? Is MAD — so long after the collapse of the Soviet Union — still the underlying realpolitik, the restraining factor between nuclear powers?

Does that mean that anyone with nuclear weapons can wage conventional warfare in the belief that they won’t face NATO or any other serious restraining military action because they can unleash terrifying global destruction?

Or is there, as some believe, the prospect of limited nuclear engagement, using area tactical nuclear weapons? This has never been tested. There hasn’t been a limited nuclear ground war. Could it be contained? Should it be contemplated outside the deeper reaches of the defense establishment?

But it is what keeps the leaders of Europe, the United States and Canada awake nights. If you favor limited nuclear war, just look to the effects of a nuclear disaster, Chernobyl, and start multiplying.

It is the unthinkable scenario that must be thought about. It is the reality that holds back NATO and makes the West a spectator to the carnage in Ukraine.

Russia isn’t a rich country. It has a large, poorly trained and equipped military. But it bristles with nuclear weapons aimed at North American and European cities. Its ability to threaten us with nuclear horror changes the balance between nations: an indelible change to future foreign policy.

In the short term, when contemplating the return of MAD in international relations, the question is: How mad — as in insane — is Putin, and how ready is Biden?

The pieces on the world chess board have moved and they won’t be moved back. The intelligentsia has yet to grasp the extent to which Ukraine has changed the world — and made it a more dangerous place. They need to catch up fast.