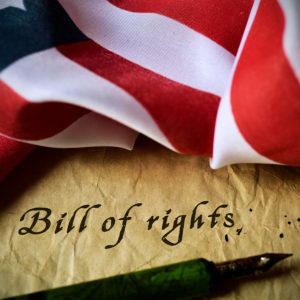 KERNS: Obstacles to the Spread of Information Threaten the Liberty Guaranteed in the Constitution

Anyone who has walked, run, rollerbladed, or biked on one of the many dedicated paths for these activities in the Pennsylvania and New Jersey regions knows the importance of keeping traffic flowing. I often bike on either the Schuylkill River Path in Philadelphia or the Ocean City Boardwalk. Every time, I find myself navigating around people who do not abide by the rules and cause backups.

These impediments come in a variety of categories. Those who stop in the middle of the path or at the entry/exit points lack all awareness of the people careening around them. Some people inexplicably choose to walk in groups side by side – obliviously blocking the entire width of the path so going around them proves impossible. Some people wear headphones that block out all surrounding noise – including people yelling at them to get out of the way.

As I bicycle on these paths, lurching and pivoting around these people who lack all recognition of the jams they cause, I think about the importance of just keeping everything moving forward, without bottlenecks or barriers.  The same can be said for the movement of ideas and information in a free society.  We should consciously work to make sure important and controversial concepts can be freely discussed and openly debated. Indeed, the Founders of our country called this Freedom of Speech and Freedom of the Press and enshrined the concepts into the first of the 10 amendments known as the Bill of Rights, which Congress ratified in 1791.

In December, we will celebrate the 230th birthday of the Bill of Rights. Do we still enjoy the liberties our founders intended? Many newspapers and websites now have the reputation of leaning so far to the left such that anything not considered woke or progressive rarely earns space.

White House press secretary Jen Psaki recently made clear that the Biden administration tracks “misinformation” and flags “problematic posts” that Facebook “needs to move more quickly to remove.”  Twitter, Facebook, Google, and Apple, have been known to actively remove or suppress conservative-leaning information by adjusting algorithms as to what users see. Indeed, many platforms have outright banned some users, most notably former President Donald Trump, and censored or suspended others. These companies, known as Big Tech, have become so popular and ubiquitous that they gained almost unfettered power over information, and the ability to inhibit it.  Conservative ideas remain firmly in their crosshairs.

Where then, can people turn for unobstructed viewpoints and news? What alternative exists to the information traffic jams that progressives continue to push on our society? The Delaware Valley essentially has two options: sites like the one where you are reading this piece, and local talk radio.

Unfortunately, thought-provoking content no longer enjoys a home in most mainstream publications.  Supporting sites like the one you are reading now – and sharing the content you enjoy to a wider audience – helps to encroach upon the stranglehold that progressives enjoy by monopolizing the media.

Luckily, we also enjoy a plethora of talk radio shows in Pennsylvania and New Jersey, where the hosts constantly debate issues of the day with a variety of guests who bring ideas to listeners that they cannot hear about elsewhere. Talk radio complements media sites that promote alternative viewpoints and vice versa.  Additionally, and perhaps most notably, local alternative media sites as well as local talk radio feature homegrown talent – they reside locally, as do the contributors and callers. You hear issues important to you because they are also important to them on a personal level, as we all come from the same geographic area. We want where we live, work and raise our families to be the best they can be so we challenge those in charge.

In November 2020, I realized the importance of this local touch. I represented the Trump campaign in a variety of election lawsuits and issues. For several weeks, virtually every local and national news outlet, as well as some from countries as far away as Japan, hounded me for interviews and comments. As some people know, I also became the target of intense and orchestrated harassment campaigns by way of hundreds of nasty telephone calls, emails, and social media posts. I also received so many threats of physical harm and even death by those who did not vote for Trump that the Department of Justice had to start investigating.

As a lawyer in active litigation, I preferred not to wade into the press firestorm, leaving that to the campaign’s information staff. However, I will never forget that the producers and hosts of the Chris Stigall, Rich Zeoli, and Dom Giordano shows did not beleaguer me to come on their programs after I explained that I was not giving interviews. Instead, each one asked me if I was safe and thanked me for not being dissuaded by the depraved individuals and groups focused on stopping me. At the time, I was too busy to even turn on my radio, but that kind of support cannot be measured and indicates the importance of these local outlets.

Anyone paying the least bit of attention must know by now that rather than debate ideas with which they disagree, many on the left will do whatever it takes to shut them down. Do not let them. Be a smart consumer of information and when you read something on an alternative media site or hear something on local talk radio that you value – talk about it and share it. Move ideas and information just like our Founders intended and guard the right to do so as if your freedom as an American depends on it. In a time when the White House, Big Tech, progressives, and left-leaning editors label thoughts as “misinformation,” your liberty is at stake.

Linda A. Kerns is an attorney in Philadelphia, Pennsylvania who is a lifelong Elvis fan and has visited Graceland more times than she cares to admit.  @lindakernslaw.