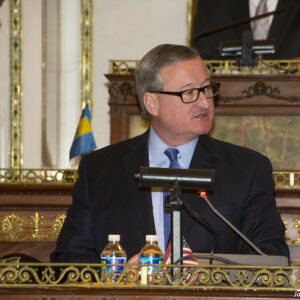 Philadelphia Mayor Jim Kenney wants to live in an America without the Second Amendment to the U.S. Constitution. In fact, he even has a name for this place. “Canada.”

Kenney made his comments to reporters on July 4th after two police officers were struck by gunfire at the Wawa Welcome America Concert on the Parkway.

“It was a chilled-back day, beautiful weather. But we live in America where we have the Second Amendment, and we have the Supreme Court of the United States telling everybody they can carry a gun wherever they want,” the mayor said. “I was in Canada two weeks ago and never thought about a gun. The only people I knew who had guns in Canada were police officers.”

In the same conversation, Kenney also complained about his job and said he will be “happy” when he is no longer mayor

“There’s not an event or a day where I don’t lay on my back and look at the ceiling and worry about stuff,” he said. “So everything we have in the city for the last seven years, I worry about. I don’t enjoy the 4th of July. I don’t enjoy the Democratic National Convention. I didn’t enjoy the NFL draft. I’m waiting for something bad to happen all the time. So I’ll be happy when I’m not here, when I’m not mayor and I can enjoy some stuff.”

Dr. Mehmet Oz, the Republican candidate for the U.S. Senate, called on Kenney to “immediately resign.”

“Mayor Kenney should resign from office. Kenney’s comments about how he will be happy when he is no longer mayor further indicate he has given up on Philadelphia. John Fetterman, Larry Krasner, and Jim Kenney all support the failed policies that coddle criminals, provide sanctuary to dangerous illegal aliens and put dangerous criminals back out on the street. These radical far-left policies have led to record-breaking homicides and unprecedented rates of violent crime in Philadelphia and across the commonwealth. Worse still, Fetterman would go further by releasing one-third of all criminals and reducing sentences for murderers. We need to restore safety and security to Philadelphia and all of Pennsylvania–it begins by getting rid of Kenney, Krasner, and Fetterman.”

Lt. Gov. John Fetterman is the Democratic candidate for the Senate. He did not directly address Kenney’s remarks or Oz’s rebuke. Instead, he railed against “gun violence” on Twitter and called for an end to the Senate filibuster.

“There is a sad irony in experiencing multiple mass shootings on a day meant to celebrate our freedom. We wish the law enforcement officers injured in the Philly shooting a safe + quick recovery,” Fetterman tweeted.

“We cannot become numb to ever-increasing gun violence. Washington needs to act + take on the NRA by prosecuting gun dealers whose weapons routinely wind up at crime scenes. And Democrats in the Senate need to scrap the filibuster + immediately pass common-sense reform,” said Fetterman.

Kenney’s attack on the Second Amendment drew responses from residents of the Delaware Valley.

“I saw a movie about a country where only the police and military had guns. It was called ‘Schindler’s List,’” said Wayne resident and firearms instructor Frank Tait.

“His failure to put competent leadership in the Philly Police Department. And to have a progressive DA only exasperated this crime problem,” said a Radnor resident who collects antique firearms. “Revolving door justice and letting repeat offenders of serious crimes out on no bail is a joke. Only when the Feds stepped into the car carjacking crimes have strong sentences been imposed. But Philly people get what they vote for. When you have an 18 percent turnout in a primary (in the DA’s race), that speaks volumes. Maybe he’d be better off in Canada?”

Kim Stolfer, president of Firearm Owners Against Crime,  was unimpressed by Kenney’s comments. “Well, thankfully, it isn’t up to him. And thankfully, he owns all the violence that’s in Philadelphia.

“The fact is, this is part of the broad brush that is being used by Democrats to paint 100 million gun owners in this country for a dozen mass murders,” Stolfer added.

The Republican nominee for Congress in the 4th District, Christian Nascimento, also called on Kenney to resign.

By Tuesday afternoon, Kenney had apologized for his comments about no longer wanting to be mayor. “I apologize for being frustrated, but I do take my job personally and I take the problems we face personally,” he said. “And I apologize for wearing my emotions on my sleeve.”