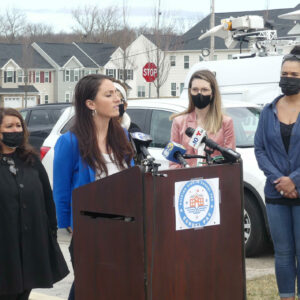 Clarice Schillinger, founder of the Keeping Kids in School PAC, addresses a press conference outside Norristown Area High School. A companion event was organized at the state capitol by Harrisburg Families United.
News

Never underestimate the power of a determined group of moms.

A new political action committee run by mothers, Keeping Kids in School PAC,  is turning into a force to be reckoned with. The nonpartisan group has vetted and endorsed nearly 90 candidates for school boards in the Delaware Valley area who agree with their philosophy of holding in-person classes for students.

Founder Clarice Schillinger, who lives in the Hatboro-Horsham School District and is the mother of two, said her movement is in response to districts not only shuttering schools but keeping them closed even when it would clearly be safe to re-open. For example, the Souderton Area School District stayed opened for the 2020-2021 school year without the spread of COVID-19. Numerous parochial and private schools also reopened.

“We’re all moms doing this,” said Schillinger. “We’re all volunteers. This is not a paid position.”

At first, they thought they would endorse 12 to 20 candidates in three to five districts in Bucks and Montgomery Counties. Then, as word spread, more candidates sought their endorsement. The PAC is now endorsing school board candidates in Berks, Bucks, Chester, Delaware, Lackawanna, Lancaster, Leigh, Montgomery, and Northampton counties.

“This week we closed endorsements because we’re only human,” said Schillinger. “We can only do so much.”

However, the group has already encountered stiff and well-funded opposition from the Pennsylvania State Education Association (PSEA), the teacher’s union. On its website, a message from Mideastern Region President  Bill Senavaitis tells readers to “make sure that our locals and voters don’t have a choice between a jerk and a jerk – let’s get quality pro-public education candidates on the ballot – and SOON.” It includes a link to a news article about Keeping Kids in School PAC.

Senavaitis did not return calls asking for a comment.

Schillinger accused the union of “strong-arming” school boards to keep schools closed, despite the fact that most parents, students, and many teachers want in-person schooling to resume. Schillinger is also concerned about campaign literature in her district where candidates mention preparing to close schools again this fall and winter in case of a COVID-19 resurgence. Although right now HHSD is open. Schillinger noted it reopened just six weeks before the primary. 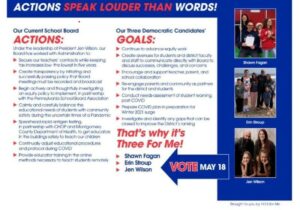 “It is my fear that schools will close again after the school board elections in the state of Pennsylvania,” she said. “We have thought this is amazing. Schools are opening back up. Do we even have a voice? This is what we’ve been fighting for. This is what we want. Or, are schools only opening because it’s an election year?”

She had a lot of hope when President Joe Biden said he would open schools in his first 100 days.

“That was not the case,” she said. “We have schools that are still closed.”

As for vaccines now being available for teenagers and possibly younger children, she is hopeful that will make a difference. But using good hygiene, masks, social distancing, and other measures have already allowed many schools to reopen, she noted.

Distance learning has been devastating for many children, who suffer from depression, increased suicide, and anxiety. Many are falling behind academically, as well. Her group has filed right-to-know requests with districts and with “every single one we filed, we found grades have significantly suffered. Everywhere.” And teachers themselves want to be back in the classroom and are feeling burned out from teaching via Zoom, she said.

Her own 14-year-old daughter missed her friends and sports during the shutdown, she said. And Schillinger sent her son to a Catholic school so he could attend in person. It was difficult for an active boy to “sit in front of a computer all day,” she explained.

“Our children are the most vulnerable in our communities and we have ignored their needs,” Schillinger said.

Women have also suffered by having to drop out of the workforce to supervise their children’s at-home schooling. Schillinger left a job working for state Rep. Todd Stephens, R-North Wales, although the political skills she learned have helped her make the new PAC a juggernaut. She said you don’t have to be a parent to care about the school board elections.

“The school boards directly affect our lives,” she said. “They are the ones who determine your real estate tax payment. That’s huge. They affect curriculum, whether schools are open or closed. They affect ranking (by determining if students are taught the skills needed to take achievement tests). They have more power than you think…They’re a public entity, funded by public tax dollars. It’s their duty to be transparent.”

Instead, she said, she had to spend a lot of time filing right-to-know requests.

“We should not have to constantly file right-to-knows to find out what’s going on,” she said.

Schillinger urges residents to find out who is running for school board in their district and what their positions are so they can be informed voters.

“There’s a lot riding on the primary,” said Schillinger. “Not only is it school board candidates, there are the primary ballot questions that would also help schools reopen and stay open if we could stop extending this emergency.”  Two of the ballot questions give the state legislature the power to rein in a governor’s emergency decrees.