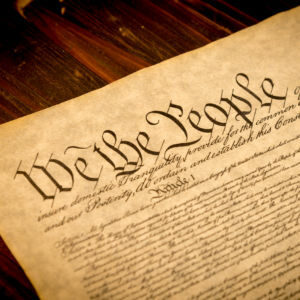 As President Joe Biden labels his political opponents “threats to democracy” and Republicans express doubts about the integrity of basic democratic institutions, one prominent American jurist believes he may have the solution.

Ginsburg is perhaps best known for nearly becoming a Reagan appointee to the U.S. Supreme Court until he withdrew his name from consideration after a national controversy over his past marijuana use decades earlier.

Today, Ginsburg is promoting the Civics Fundamentals program he launched in September 2021, “a free, standards-aligned course to help all learners develop the foundational civics knowledge that every American should have,” according to its website. It uses the 100-question U.S. Citizenship and Immigration Services exam as the starting point for education about how American democracy is designed to work.

Pennsylvania currently requires high school students to take a civics test, either the citizenship exam or a locally-developed test, before graduating. The results, however, aren’t graded. Instead, students who achieve a perfect score get a certificate from the state’s Education Department.

That is not good enough for state Rep. Karen Boback (R-Harveys Lake). She introduced legislation two years ago requiring students to pass the exam in order to graduate. The bill was referred to the Education Committee and has not moved forward.

According to a 2018 report by The Woodrow Wilson National Fellowship Foundation, about two-thirds of Americans would not pass the citizenship test if required to take it.

“The alarming decline in civics knowledge among young Americans is the catalyst for this new legislation,” wrote Boback in a legislative memorandum on the bill. “This lack of knowledge is evidenced in a 2019 survey conducted by the University of Pennsylvania’s Annenberg Public Policy Center, which showed that only 39 percent of adults were able to identify at least one of the three branches of the U.S. government.”

For each of the 100 questions, Ginsburg hosts a short video — less than three minutes — to further explain the correct answer. Ginsburg said the videos don’t just feature talking heads but include archived footage, reenactments, and animations.

“Students are much more inclined to absorb material from video presentation than they are from reading — for better or worse — but that’s where they are and so that’s where I want to find them,” Ginsburg said.

Ginsburg’s timing is perfect. State governments are also expressing concerns about how little their high school graduates learn about the democratic process.

In Florida, Gov. Ron Desantis recently signed three bills focused on how civics should be taught in public schools and universities. One bill requires high school seniors to take a civics assessment before graduation.

The South Dakota Department of Education released a proposed set of social studies standards for kindergarten through grade 12. One of the new standards targets ensuring students have “sound skills for making sense of the past, understanding their neighbors, earning a livelihood, and exercising the rights and responsibilities of citizenship with prudence.”

The New Hampshire Department of Education adopted a 16-week course with Civic Fundamentals as the foundation. Beginning in the 2023 school year, any student may take the course and receive credits for their high school transcript upon successful completion.

According to Rebecca Winthrop of the Brookings Institute, America’s education system was built on the notion that schools play a central role in preparing young Americans to be civically engaged. But with education initiatives inspired by the “Sputnik moment” in 1957 or President George W. Bush’s push for STEM through the No Child Left Behind Left Act, the emphasis has been on math and science.

There has been no gain in proficiency for civics education in America since 1998, and less than 25 percent of the nation’s students test as proficient, The National Assessment of Educational Progress reports.

When the Dobbs v. Jackson case opinion—the landmark case which found that a constitutional right to abortion does not exist—was leaked in early May, protesters gathered outside the homes of conservative U.S. Supreme Court justices.

Ginsburg said the sight was outrageous and totally inconsistent with our American principles.

“People are treating the courts and the Supreme Court in particular, as though it were a legislature,” Ginsburg said. “They’re meant to be independent of public opinion and dependent on the constitution.  If people knew that, then they wouldn’t waste their time demonstrating up at and harassing this court. That’s a prominent manifestation that we’ve seen in the last few years. It gets worse and worse as people know less and less.”