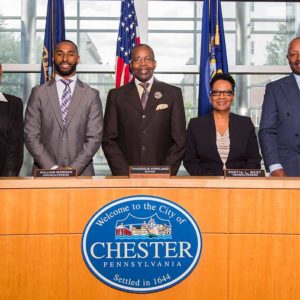 A Commonwealth Court judge delivered a no-nonsense ruling in favor of the receiver for the City of Chester, after city officials apparently challenged his power to enact his agenda to right the city’s financial ship, which has been taking on water for years.

The receiver, Michael Doweary, and his attorneys at the Department of Community and Economic Development, filed a brief with the court in mid-December asking the judge to affirm that Doweary and his team had the power to execute their recovery plan — which includes hiring and firing, reorganizing departments within the city structure and creating the office of chief operating officer.

“The receiver has the power to implement the Recovery Plan confirmed by the Court and the authority to require compliance by City officials,” Commonwealth Court Judge J. Andrew Crompton said in response.

However, while the ruling was a clear win for Doweary, the judge sprinkled it with caveats that Doweary and city officials will have to navigate, especially where the creation of a COO is concerned.

“[T]o the extent the duties of the COO overlap with and seem to supplant the duties conferred on the Mayor, the Court does not construe the current Plan to allow the creation of the COO position holding the duties described,” the judge also noted.

The city and the receiver will have to hammer out a modified version of what the COO position will consist of and submit that to the judge for approval.

On several occasions in Judge Crompton’s order, he seemed to chide all sides, emphasizing that the city council and the receiver are required to cooperate and consult each other as the process moves along.

The city did not return a request for comment on the most recent ruling.

Previously, the city had said it would strongly defend its powers.

“The city of Chester is a unique municipality that is governed according to the Third Class City Code and our Home-Rule Charter,” Aigner Cleveland, press secretary for the City of Chester, told Delaware Valley Journal. “As such, there are certain powers within those guidelines that cannot be superseded by the state.

“Mayor Kirkland and the rest of Chester City Council want to ensure that all parties are operating within their scope of authority, with respect to both our Home-Rule Charter and the Third-Class City Code.”

For more than two decades, Chester had been under Act 47 supervision because its finances were in such poor shape. Many of the existing problems accelerated this year when the coronavirus crisis arrived which caused tax revenues to plunge.

In April, Gov. Wolf declared a fiscal crisis for Chester which eventually put the city into receivership.

In August, Doweary outlined the many angles he would pursue in trying to get the city back on track financially, including trimming the city’s workforce, eliminating redundant positions, creating a COO position, and purging the city’s pensions which he sees as degraded by fraud and abused by pension spiking.