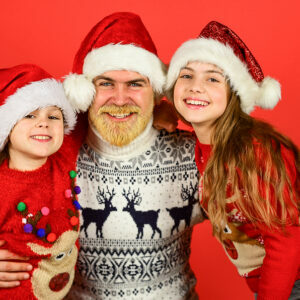 Jolly Is as Jolly Does

‘Tis the season to be jolly, but for many, jolly is hard to feel. It is, after all, a year where we’ve battled a pandemic, epic levels of political acrimony, and even Netflix fatigue. How many police procedurals or historical dramas can one watch? I know, because I’ve been watching for almost two years. So, if you aren’t feeling jolly, and you don’t want to be the Grinch that stole Christmas, help is on the way with just a few simple tricks.

Begin by making a simple declaration to help you feel better about yourself: “I am not the only one who can’t see a glass half full. In fact, I’m not seeing any water at all.” This is one instance where it might feel good to claim to be like the majority. What we’re feeling is normal. Now, we can proceed to fix our mood.

Begin with dogs. Walk a dog, and if you don’t have one, find a friend who has a dog and join them. A short walk will bring home the simple pleasures of seeing creatures gracefully run or be incredibly gleeful with the smallest of treats. (The only “Apple” gift they know is crunchy and often tastes tart.) You will be reminded of how modest one’s needs can be, and you’ll get some much-needed exercise.

Bake something that creates a warm and inviting aroma in your home. If you are ambitious in your food prep skills, make bread. You can also play it safe with an apple crumble helped by a dollop of ice cream. Don’t count the carbs, but do add a cup of coffee or tea with toddy as you relish the moment.

Watch “Home Alone.” Even better, carve out a few nights and watch the series with family and friends. Then have a meal or dessert (you may have just baked something), where everyone makes their case for which “Home Alone” was best. It’s a “twofer,” meaning you get to laugh when you watch the movies and then laugh again as people defend their choice. It’s maybe a “threefer” if dessert is added.

Listen to some Motown or Peter, Paul, and Mary, and do it loudly! It will bring those of us who are either Gen-X or baby boomers into an instant mood of nostalgia while we sing along. If it is Motown, we might end up dancing, which is especially fun if our Millenials and Gen-Z folks are watching. For no extra charge, we get to watch them roll their eyes.

Do something kind for someone you don’t know. It could be as simple as leaving a generous tip. While serving in a soup kitchen may not be an option in 2021, we can apply creativity and find other ways to reach out. The world needs you, and you need the world.

Write something. You’re not a writer? It doesn’t matter. The simple pleasure of getting your thoughts down and maybe sharing them with others can be cathartic. Making an effort, particularly if you don’t fashion yourself to be a writer, sends a message to your circle that it’s good to move beyond your comfort zone. And don’t worry about doing something really well. Sometimes, just “doing” is good enough.

Finally, let’s not forget the value of humor to lift our mood. When I try to tell a joke, the funny part is watching me try. I lack all capabilities—timing, dramatic tones, and delivering the punch line. Usually, my joke is far less funny than my skill deficit in telling it.

Now consider the possibility of a circle of family and friends where everyone contributes a joke. We’ve got knock-knock and changing the light bulb jokes, and so much more—appropriate for all ages. Before you know it, your group is laughing as much at the jokes that failed as the ones that worked.

And there might just be a lesson tucked away in there as well, but since it’s the season to be jolly, I suggest keeping it light with some pie a la mode nearby, of course.