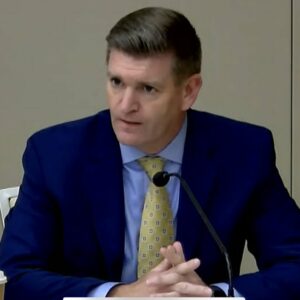 John Yudichak: A Man Without a Party, but With Plenty of Friends

Pennsylvania voters are notorious for having an independent streak, backing Barack Obama in 2008, Donald Trump in 2016, and Joe Biden in 2020. And that’s just fine with state Sen. John Yudichak, the only independent in the Pennsylvania state legislature.

Yudichak represents Luzerne and Carbon Counties, where the shift in support among working-class voters toward the Republican Party pre-dates Trump’s ride down the escalator in 2015. Yudichak, who was first elected to public office in 1998, made his shift from the Democratic Party to a registered independent in 2019. A native of Wilkes-Barre, he told Delaware Valley Journal his journey is similar to many of the folks he grew up with in northeastern Pennsylvania (NEPA).

Northeastern Pennsylvania was a key presidential campaign target in both 2016 and 2020.  It’s the birthplace of two national Democrats: Sen. Bob Casey and, of course, Pres. “Scranton Joe” Biden. At the same time, voter registration has been shifting toward Republicans for more than a decade.

And while Democrats still outnumber Republicans in Luzerne County, their margin has fallen from 53-36 percent in 2016 to just 48 percent Democrat/39 percent GOP today.

“My values haven’t changed, my perspective on the world has changed, the Democratic and Republican Parties have changed,” Yudichak said, “It’s an easy — I’d call it a lazy– analysis to say folks were enamored with Trump and that’s why the region shifted Republican. That move started a long time ago.”

Yudichak’s decision to become an independent and caucus with the GOP was a tremendous blow to Democratic hopes of winning a majority in the 50 seat state Senate. With a current 27-22 working majority (and one vacancy), many political pros believe Yudichak’s move put the body out of reach for the Democrats.

“It really took the wind out of their sails,” said Mike DeVanney, a political consultant who has worked on state Senate campaigns across Pennsylvania. “Democrats had some surprise victories in 2018, but this made the path to the majority much harder. I believe it affected their fundraising and candidate recruitment as well.”

Asked how caucusing with the Republicans is going Yudichak said, “The response has been terrific. They’ve been very professional. I still have many friends on the Democratic side of the aisle in the House and Senate, we work together on issues where we agree.”

Yudichak’s bipartisan tone in many ways echoes the message of Biden’s presidential campaign. So it wasn’t a great surprise when Yudichak backed the former vice president — and NEPA favorite son — in the 2020 general election. “One of the reasons I like Joe Biden was his entire career in Washington was about building consensus and building bipartisan coalitions.”

However, Yudichak agrees the Biden presidency has been more partisan than many expected, particularly on the $1.9 trillion COVID-19 spending package, and he’s hoping that will change. “I am concerned they moved away from that, but that’s also a responsibility of the Republican Party to find common ground.”

One key area where Yudichak splits with the Biden administration is energy policy. He is a major proponent of energy jobs and supports projects like the PennEast pipeline. He notes that while the administration is attempting to block the Keystone XL pipeline, the PennEast project will still move forward. “That’s an encouraging decision, that’s good economic policy.”

Yudichak also aggressively pursued the state’s proposed Local Resource Manufacturing Tax Credit, a policy supported by business and labor organizations, but opposed by many Democrats for its reliance on natural gas. Democratic Gov. Tom Wolf vetoed a version of the bill in March but a re-negotiated plan passed the House with a bipartisan 163-38 vote, and the state senate 40-9.

Yudichak played a key role in the compromise. “I didn’t have a lot of support from my Democrat colleagues, but I was able to work with my House Republican colleagues, the Pennsylvania Building Trades, and the Pennsylvania Manufacturing Association, Chambers of Commerce across Pennsylvania, and the Pennsylvania Chemical Council,” Yudichak said. “We found a path to an agreed-to bill and we were able to put that on the books.  As a result, we have two companies interested in investing $400 million up front, employed a minimum of 800 people, and produce a Pennsylvania product,” as required by the law.

“That couldn’t happen if I wasn’t an independent and had the ability to work across party lines.”

With an open U.S. Senate seat and a contested governor’s race in 2022, it’s not surprising political insiders are eyeing Yudichak as a potential candidate. And the 22-year veteran pol isn’t doing anything to dissuade them.

“It’s hard to plan out your political future when you are trying to save lives in the middle of a pandemic,” Yudichak said when asked about a potential run for higher office. At the same time, the senator is supporting a 501(c)(4) called People Not Politics. “It’s not about supporting political candidates, it’s about supporting a political idea that we need to move beyond the partisan nature of our current political conversation and empower people.” Yudichak cited open primaries, redistricting reform, and common-sense election reform as part of the ‘People Not Politics’ agenda.

“I’m certainly committed to serving my constituents through 2022, and I’m certainly interested in looking to serve them again.  Whether it’s in the Senate, whether it’s in another office, that’s ultimately going to be up to the voters.”

Pennsylvania voters haven’t elected a governor from outside the two major parties since James Pollock was elected as a Whig in 1854. No U.S. Senate candidate from a third party has won in Pennsylvania since the state began electing them by popular vote in 1914.

“History speaks for itself and is not likely to change,” said Charlie Gerow Republican communications expert. “Pres. Trump warned at CPAC about the dangers of a third party. He is right. Sen. Yudichak has been a very valuable member of the state Senate, and would serve best there, unless of course, he wants to run as a Republican for one of the open statewide seats on 2022.”

Whatever the future holds for Yudichak, it’s likely he will continue to keep his independent streak. “I may be a little aggressive, and some folks don’t like that, maybe they don’t appreciate the passion to serve the folks that gave me this opportunity,” Yudichak said. “I’m hoping that we can rise above those extreme toxic voices on the far right and far left, they really do a disservice to the voters of Pennsylvania.”