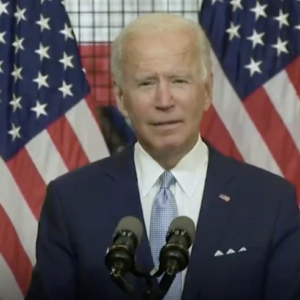 Joe Biden came to Pittsburgh Monday to address politically-motivated violence in America’s streets, explicitly declaring that rioting and looting aren’t legitimate forms of protest and will not bring about change.

Biden tried to lay the violence in liberal cities like Portland, Oregon, Chicago and Philadelphia at the feet of President Trump. “Does anyone believe there will be less violence in America if Donald Trump is reelected?”

“He may believe mouthing the words law and order makes him strong, but his failure to call on his own supporters to stop acting as an armed militia in this country shows you how weak he is,” Biden said.

Critics note, however, that Biden declined to call out anti-Trump organizations like Black Lives Matter and Antifa, whose members have been directly linked to much of the violence this summer. Over the weekend, a Trump supporter was shot and killed at point-blank range in Portland. The alleged shooter, Michael Forest Reinoehl, 48, posted “I am 100 % ANTIFA all the way!” on social media.

While Biden called out “unwarranted police shootings,” and “right-wing militias,” he made no mention of violent organizations on the left.

During a news call organized by the Trump campaign a few hours before Biden’s speech, Butler County, Pennsylvania Sheriff Michael Slupe said “the people who are protesting now are not Trump supporters. They are Joe Biden supporters.”

“Joe Biden has yet to condemn Antifa,” Slupe said. “These rioters aren’t protesters. They’re acting like criminals. Why? Because if Joe Biden were president, he’d let them.”

According to Slupe, 42 of Pennsylvania’s 67 county sheriffs back Trump.

President Trump certainly believes the street violence is hurting Biden’s campaign, tweeting out Monday, “Joe Biden is coming out of the basement earlier than his (sic) hoped for ten days because his people told him he has no choice, his poll numbers are PLUNGING! Going to Pittsburgh, where I have helped industry to a record last year, & then back to his basement for an extended period.”

National polls appear to show the race tightening over the past week, and Biden’s margin in Pennsylvania is below five points in the latest RealClearPolitics poll average. So, will the law-and-order issue help Trump in Pennsylvania, even in the low-crime suburbs of the Delaware Valley?

“I think those voters are very concerned,” veteran GOP strategist Charlie Gerow told Delaware Valley Journal. “You can walk up City Line Avenue and see what the folks in Lower Merion Township think. They are very concerned about their safety, security and personal welfare. And I think it is moving suburbanites back to President Trump and the Republicans. Maybe not in droves, but they’re moving.”

“The fracking thing is interesting for Biden because it’s such a parochial issue in Pennsylvania.The opposition to fracking exists where there isn’t any fracking going on, but in the areas where fracking actually occurs, people are strongly in favor of it,” Gerow added. Biden is trying to navigate the issue in a way that doesn’t alienate either blue-collar workers in the energy sector or the affluent suburbanites of the Delaware Valley who oppose the practice.

“Joe Biden’s kind of caught between the dog and the tree on that one,” Gerow said.

However, Biden has an extensive record of endorsing a fracking ban.During his primary campaign debate with Bernie Sanders in March, for example, the Vermont senator said, “I’m talking about stopping fracking, as soon as we possibly can,” to which Biden replied, “So am I.”

And when asked in another Democratic debate last year if there “would be any place for fossil fuels, including coal and fracking in a Biden administration,” Biden said “no.”

“It’s a little ridiculous this is even up for debate and that some in the media continue to give Biden (or Harris) a free pass on their comments around fracking,” said Thomas Pyle, President of American Energy Alliance. “Both have said they would ban fracking in some form and later walk their statements back – especially while campaigning in sensitive oil and gas swing states – claiming they didn’t mean it. He’s either lying or talking out of both sides of his mouth – and I’m not sure which is worse.”

“The Bidden-Harris energy plan is one that would leave Pennsylvanians jobless, America less energy secure, and more dependent on China. It is abundantly clear which ticket is looking out for working-class Americans and which ticket would prefer to outsource America’s energy security,” Pyle said.

The issue of fracking, energy policy and petrochemicals is likely to continue throughout the 2020 campaign in Pennsylvania.

“You know, Biden made that speech right down the road from the cracker plant,” Gerow noted, referencing Shell’s massive petrochemical plant that refines natural gas into plastic pellets. “Democrats recognize it’s a huge benefit to the Commonwealth. Gov. Tom Wolf even said he’d look for another one.”