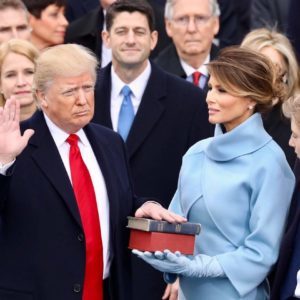 Imagine, for a moment, President Trump staying in office past January 20 even though he lost the election. Seems wild, until you realize that this was once common practice.

Before 1933, an out-going presidential administration would remain in office until March 4. It wasn’t until the ratification of the 20th Amendment during the last days of the Hoover administration that the lame-duck period for both the president and Congress was considerably shortened, ensuring that leaders voted out of office had little time to impose their whims on the American people.

Today, as in 1933, America finds itself in a position where transition times are longer than they need to be and lame ducks reign with impunity. It’s time to shorten once again the time between Election Day and Inauguration Day.

The status quo of a nearly three-month transition is deeply broken.

The dragged-out election certification process means that a defeated incumbent can wait until mid-December before having to release transition funds to the incoming administration. We were fortunately spared from having to wait that whole period this time, but there’s still been plenty of time for irresponsible shenanigans by the president.

Before Trump (and now), out-going presidents used the transition period to promulgate “midnight regulations” out of the sight (and electoral wishes) of the American people.

For example, in late 2000, outgoing President Bill Clinton used the lame-duck period to add more than 26,500 pages to the Federal Register, including onerous environmental standards on air conditioning, heating pumps and washing machines. Surely, it would have been better to give incoming President Bush a head start on crafting his agenda instead of prolonged, secretive regulatory schemes.

After the midterm elections concluded in 2010, lawmakers wasted no time putting together a $1.2 trillion spending bill laden with more than 6,000 earmarks totaling $8 billion.

An outraged Sen. John McCain (R-Ariz.) lamented: “The American people said just 42 days ago, ‘Enough!’ … Are we tone deaf? Are we stricken with amnesia?” With a prolonged transition period, these lame-duck outrages are par for the course.

It used to make far more sense to have a prolonged transition period, when heading to Washington, D.C. from across the country and communicating with cabinet appointees could be a multi-week affair.

Now, president-elects can get to Washington, D.C. in a few hours, and quickly, easily communicate with prospective Cabinet members over the phone (and video conferencing), leaning on an intensive, well-funded vetting process.

Nowadays, it is not unusual for presidents to fill in many of their administration’s Cabinet seats a month or so after being elected. Moving up the date of inauguration would just hasten this process, and probably force candidates to have a better idea of who they would want in their top ranks.

Even if shortening the transition period by a month makes sense, the logistics wouldn’t be easy.

Altering the status-quo would probably require amending the Constitution, which is no easy task in today’s hyper-polarized environment. But similar to the 27th Amendment (ratified in 1992), the change could easily attract bipartisan support and help bring the country together.

Even barring a change to the Constitution, it is possible for out-going presidents to set a norm where they hand over power early. The otherwise-vile Woodrow Wilson planned one such bold move in the event that he lost the 1916 election. But President Wilson was re-elected, and this plan never saw the light of day.

Whether through presidential maneuver or constitutional amendment, it is time to end the sway of lame ducks.

Ross Marchand is a senior fellow at the Taxpayers Protection Alliance. He wrote this for InsideSources.com.