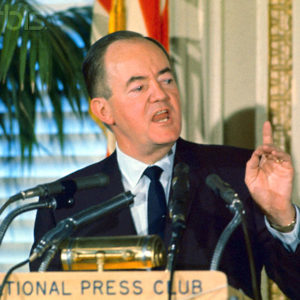 Is Joe Biden the Next Hubert Humphrey?

OK, let’s check the tale of the tape. Joe Biden vs. Hubert Humphrey:

Both served double-figure years in the U.S. Senate.

Both ran for the presidency three times.

Both were vice presidents for liberal Democrats.

And there’s something else. “They both talk a lot, long-winded and garrulous,” says Arthur Cyr, a political economy professor at Carthage College in Kenosha, Wisconsin.

In fact, Muriel Humphrey, wife of Hubert, once quipped to her husband, “Hubert, a speech doesn’t have to be eternal to be immortal.”

A Biden victory in November essentially would mean a third term for President Barack Obama, just as a victory by Humphrey in 1968 would have been another term for President Lyndon Johnson. But sometimes, life gets in the way of the best-laid plans.

How about strife and division.

That means another common bond for Biden and Humphrey is party discord.

In 1968, the Democratic Party was being ripped at the seams because the anti-Vietnam War faction (mostly young folk) confronted the pro-Vietnam War establishment. That’s why riots broke out at the Democratic National Convention in Chicago.

Now fast-forward to 2020. Biden, a consummate moderate Democrat, isn’t dealing with a shooting war but an ideological battle with the left side of the party. The progressive far left — led by Bernie Sanders, Elizabeth Warren, Alexandria Ocasio-Cortez — has been in a perpetual  party-identity stand-off with the moderate middle, as in Biden, Amy Klobuchar, Pete Buttigieg.

So how far left will the progressives drag Biden as the presumptive presidential nominee for the Democrats and can they all get along in the end? And can Biden recapture the magic of Obama, his former boss?

In 1968, Hubert Horatio Humphrey (the original Triple-H) early on during the campaign trail adhered to the pro-Vietnam War stance touted by his boss, President Lyndon B. Johnson, who surprisingly dropped out of his race for re-election in March of that year. And the more Humphrey maintained that course, the more he sank in the polls.

After the Democratic National Convention, Humphrey trailed Republican Richard Nixon, a skilled — if not devious — candidate, by 15 points in the polls. Humphrey’s allegiance to Johnson was costing him like a gambler playing a bad poker hand.

But Humphrey’s hand changed drastically in late September of ’68 when he finally broke ranks with LBJ and publicly advocated a halt to Johnson’s relentless bombing campaign in North Vietnam.

That was the catalyst for Humphrey’s rapid rise against Nixon, whose platform consisted of two main policies — end the Vietnam War and restore “law and order,” which was a veiled reference to quashing the rioting and crime issues that ravaged predominantly black neighborhoods nationwide after the 1968 assassination of Dr. Martin Luther King Jr.

Then, Humphrey caught a monumental break in October, five days before the election. Johnson announced a pause in the Vietnam bombing coupled with a pursuit for peace talks with Vietnamese leaders.

Some astute political observers have hypothesized that if the ’68 presidential election were held Nov. 12 or Nov. 19 instead of Nov. 5, then Humphrey would have won, which would have meant no Watergate, no Nixon resignation in the White House, no subsequent pardon by President Gerald Ford.

Instead, Humphrey ended up losing the election by only 500,000 votes.

Could something similar happen to Biden?

Most national polls indicate that Biden is either virtually tied or comfortably ahead of Trump in the electability category, but there’s much to be said for the “enthusiasm meter.”

For Trump, the “very enthusiastic” tally is about double on the Republican side, around 55 percent, according to an ABC News/Washington Post survey.

And very enthusiastic voters do what? They vote.

Remember, Humphrey’s enthusiasm needle didn’t surge upward until he parted ways with Johnson on Vietnam. Only about five weeks before the election. And we know how that ended.

Two months after King was killed, Democratic presidential candidate Sen. Robert F. Kennedy was assassinated after winning the California primary. Enthusiasm was his constant companion, especially among the young and people of color. The charismatic RFK probably was Barack Obama before Barack Obama in coalition building.

Humphrey was a traditional Democrat of the time, meaning he garnered support from the nation’s unions, farmers, older voters and the most loyal of the party establishment.

Which brings us back to Biden. His presidential fortunes may hinge on four factors: the arc of the coronavirus pandemic, how Trump handles the health crisis, Biden’s choice for a running mate and the Democrats’ persistent haranguing of left vs. moderate.

The first two factors are out of Biden’s control; the next falls under the category of decisions; and the fourth is the inner turmoil that sabotages a party’s quest from within, as Hubert Humphrey knew all too well.