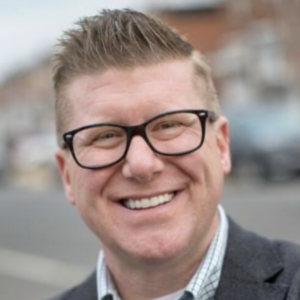 But a few hours later, the lede had been reworded to “GOP resurrects Facebook posts by Democrat running for Pa. House in Northeast Philly.”

Now the Philadelphia GOP is calling foul, saying the change is a textbook case of media bias that boosts Democrats, launching their complaints on Twitter.

“Do Democratic campaigns simply call @ByChrisBrennan and the @PhillyInquirer, and say ‘make this headline more favorable for us,’ and they do it?  Is it that easy?” the group tweeted. “It must be amazing! Spot the difference in the headlines? #democraticprivilege #mediabias” 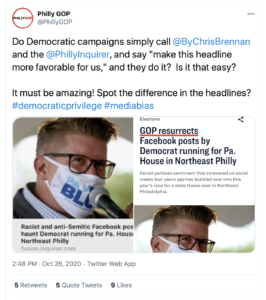 Inquirer deputy news and senior politics editor Dan Hirschhorn responded, saying, “We change headlines post-publication often, & we update the timestamp for transparency when we do. I wrote the 1st headline. Upon further reflection about the context of the posts, I wrote what I consider to be the more accurate 2nd headline. That’s all”

The entire ordeal begins with a 2016 comment thread on social media in which Doyle wrote in response to another person, “Shouldn’t you be hanging n****** somewhere?” and later followed with another comment, “Maybe these are more your ilk.” The latter post included a picture of a headstone which had “F****** Jew” spray painted on it.

The Philadelphia Federation of Teachers quickly pulled their endorsement of Doyle who is running against State Rep. Martina White, the only Republican representative with a district based solely in Philadelphia.

Doyle apologized for the comments while also claiming he was not motivated by bigotry when he wrote the remarks.

“In 2016, tensions were at an all-time high,” he said. “I like many other Americans engaged in confrontations via social media. Unfortunately, during one of my interactions with a blatant racist and anti-Semite I mocked their hate by using the language of hate myself.”

Hirschhorn responded again to the GOP saying, “In the posts, Doyle was clearly sparring with someone he considered to be racist and anti-Semitic, not advocating for those bigotries himself.”

But the Philly GOP still thinks the Inquirer is employing different standards.

“As we have been told thousands of times by the Inquirer and Democratic Party leaders across the city there is no excuse, no context, no reason that this type of language or imagery should ever be used, justified or accepted,” Jason Ercole, spokesman for the Philadelphia Republican City Committee, told Delaware Valley Journal. “The effort of the Inquirer to do just that and allow those same Party leaders to escape unscathed in allowing it is inexcusable and hypocritical.”

For years, conservatives have argued that the mainstream media uses a formula for some headlines with such regularity it has become a trope, known as “Conservatives Pounce.”

Republican commentator Noah Rothman defined the bias as such:

The Inquirer declined to comment to Delaware Valley Journal.