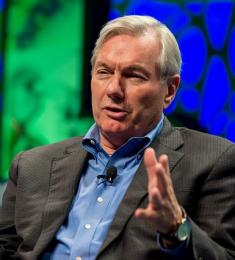 Top infectious disease epidemiologist Dr. Michael Osterholm says the world will never get rid of COVID-19 because even if it is temporarily contained it will “keep on coming back.”

Osterholm, director of the Center for Infectious Disease at the University of Minnesota, spoke to an audience of more than 150 policymakers, local and state officials, and reporters in a Zoom briefing Wednesday and expressed a mostly negative outlook on the future of fighting the virus, the long-term efficacy of vaccines and the near-impossibility of contact tracing in the current environment.

“The coronavirus is very different than any virus we have ever seen,” he said. “It was never a question of it being a pandemic… our group actually put out a statement on January 20 declaring this would be a pandemic and it would actually unfold as it did in February and March.

Osterholm said he’s reluctant to go along with the concept of an “October Surprise” — that a vaccine will be ready for use before year’s end. But even If some vaccine comes to the forefront: “If we get 18 to 24 months out of it I think we will have a major success.”

He also said he expects a major uptick in cases in the fall.

“With the opening of high schools, junior highs and colleges all hell is going to break loose and I think we can see these numbers go up substantially higher to a whole new level,” because of the whole issue of indoor air.

Not everyone was so negative when it came to the possibility of a usable vaccine.

According to Goldman Sachs, the Food and Drug Administration (FDA) is expected to approve at least one coronavirus vaccine this year. In this scenario, a great number of Americans could get vaccinated by July of next year, according to the investment bank.

“While highly uncertain, our baseline expectation is that a large number of vaccines eventually gain approval with at least one FDA approval this year,” Struyven told investors in a recent report.

But Osterholm says the problem is not only the efficacy but the safety of the vaccine — something he says “might not come to question until 12 to 18 months after it’s been administered; we can’t say what it will be.”

“I don’t believe for the life of me that these vaccines are going to have long-term durable immunity,” he added. “If I had to give it a guess, I would say potentially in a month to several years. That will bring us to the issue to herd immunity, and we’re going to have to live with that.

“I don’t think people have thought that through yet.”

He also said that contact tracing in the current environment “would be like trying to plant your petunias in a Category Five hurricane.”

Osterholm said the U.S. has failed in its efforts to control the spread of the disease because it “declared victory over the virus when we had no business doing so.”

“Public health can’t get rid of it but we surely can do a lot to limit it,” he said. “We’re going to be in this for the long haul, right now we estimate that about eight to 10 percent of the U.S. population has been infected with this virus. This virus is not going to slow down in its transmission.”

The result is more than 4.7 million cases and 156,000 deaths as of early August, according to data from Johns Hopkins University.