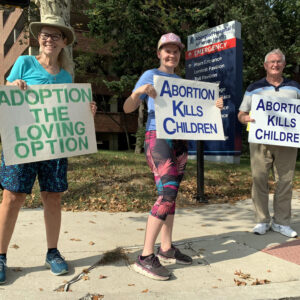 In Wake of Dobbs Decision, Abortion Politics Heats Up in Harrisburg

Activists on both sides of the abortion issue are fighting in Harrisburg over the legal future of the controversial procedure, and they’re both  leveling accusations of “extremism” to make their case.

Supporters of legal abortion point to a proposed amendment to the state constitution from abortion opponents, “providing that there is no right to abortion or funding for an abortion.” The resolution, condemned as “extreme” by its opponents, passed the GOP-controlled legislature last week.

In order for it to take effect, it must pass again in the next legislative session, and then voters must approve it in a referendum, possibly in 2023.

Gov. Tom Wolf (D) has jumped into the fray, issuing an executive order that the state would refuse to honor any warrant from another state for a person charged with a criminal violation involving reproduction. The order also protects healthcare professionals. Wolf stated in a press release he has vetoed three abortion-related bills.

“With his vetoes on these pro-life bills, Gov. Wolf brags about his support of late-term abortion, as well as his support for ripping babies apart limb by limb, aborting babies that have Down syndrome, and putting women with ectopic pregnancies at more risk,” said Dan Bartkowiak, director of communications for Pennsylvania Family Institute. “This is an appalling display of extreme pro-abortion politics that are out of touch with Pennsylvania families. Sadly, this has come to be expected from a governor that is a former volunteer for Planned Parenthood and has received significant campaign contributions from the abortion industry.”

Marlene Downing, deputy director for Pennsylvania for the Susan B. Anthony List, said, “The majority of Pennsylvanians who are pro-abortion do not want the restrictions already in place to go away.” These include the 24-week limit and preventing minors from undergoing the procedure without parental consent.

“Hopefully, the constitutional amendment will be passed,” she said. The amendment would not ban abortion in Pennsylvania, but it would help prevent current limits on abortion from being removed by a future legislature, she said.

Planned Parenthood Pennsylvania Advocates Executive Director Signe Espinoza took the opposite position. She said in a statement the legislature has “taken a significant step toward forcing their radical anti-abortion agenda into the Pennsylvania Constitution.” She complained the process was rushed and the vote taken “under the cover of darkness.”

“Anti-abortion legislators have advanced a bill that will take rights out of our constitution. The bill can pass again in January, be on the 2023 primary ballot, and lead to abortion bans by this time next summer.

“This is the most expedited timeline possible, and we know that these extremists have been planning for this since they stacked the United States Supreme Court with the sole goal of overturning Roe v Wade. This process was not transparent, and that was intentional by a far-right majority dead-set on advancing a fringe ideology,” Espinoza said.

Downing said the Susan B. Anthony List has been going door-to-door throughout the state, passing out pro-life literature. Some 225,000 households had been reached by early July, she said. Their volunteers also speak with people about their pro-life message when someone is at home.

“Fetterman opposes all limits on abortion and even defends late-term abortion and taxpayer-funded abortion and denying babies who survive abortion life-saving medical care,” the brochure said.

“Shapiro is a pro-abortion activist who opposes all limits on abortion,” it continued. “Shapiro supports abortion on demand up to the moment of birth, all at taxpayer expense.”

Ironically, both the Fetterman and Shapiro campaigns are running attack ads on television against Dr. Mehmet Oz and Sen. Doug Mastriano, the Republicans running for senator and governor, that call them “extreme” for their pro-life positions.

“We are just educating people about candidates who are extreme on abortion,” said Downing, who is also on the board of the Pro-Life Union Pennsylvania. “Our goal is to talk to Pennsylvanians.” Most residents are “not against abortion or for abortion. They like restrictions on it, that middle ground…We’re talking to all the voters we can.”