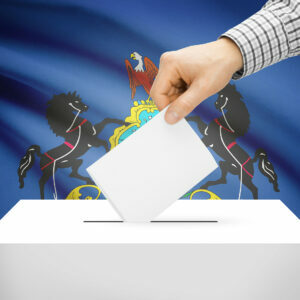 For the first time this century, more Republicans turned out than Democrats in a Pennsylvania midterm primary, according to the Pennsylvania Department of State. It’s part of a national trend as Republican turnout continues to lead Democrats thus far in the 2022 primary season.

Following the June 28 primary elections, Republican voter turnout nationwide is up by 26 percent, whereas Democrat turnout is down by four percent, according to John Couvillon of JMC Analytics & Polling.

In total, 71,909 more votes cast statewide in the senate race were Republican, according to calculations from the Department of State. The Republican margin was narrow, capturing just 51 percent of votes cast –– but Democrats have traditionally outperformed Republicans in these elections, even when their party controlled the Oval Office. Traditionally, voter turnout increases for the party out of power.

For example, in Bucks County, registered Democrats outnumbered registered Republicans by more than 7,000 on Election Day. But more Republicans voted than Democrats, and voter turnout was 4.5 percent higher for Republicans, according to Bucks county communications director James O’Malley.

While Bucks County reported higher Republican votes, Democrats still outperformed Republicans in the four suburban counties  by approximately 37,000 votes in the senate race which was heavily contested on both sides. That may sound like good news for Democrats, but it’s not.

According to Ari Mittleman, host of the Pennsylvania Kitchen Table Politics Podcast, the Philadelphia suburbs are a critical battleground. Democrats need a strong performance to make up ground they’ve lost in the central and western parts of the state.

In the 2016 presidential election, for example, the Clinton-Kaine ticket secured roughly 251,000 votes and won Montgomery County — Pennsylvania’s 3rd largest county, but they lost the state.

“The Biden-Harris ticket also won the county, but secured upward of 319,500 votes,” Mittleman said. “For a Democrat to win statewide, they need a very strong turnout in Montgomery and adjacent counties.”

Still, the Delaware Valley is a rare bright spot for Pennsylvania Democrats when it comes to voter registrations. At the state level, approximately 32,000 voters switched their affiliation from Democrat to Republican since the last midterm, according to the Department of State election statistics. Just 8,700 Republicans flipped to the Democrats, who suffered an overall loss of 50,000 registered voters.

But registrations are up 10 percent since 2018 in the Philly suburbs of Chester, Delaware, Montgomery and Bucks Counties.

Over that same period, Republicans in the collar counties have lost 1,111 registered voters.

Of the four Philadelphia county suburbs, Democrats have the strongest voter registration in Montgomery county at a count of 298,619. Montgomery County Democratic turnout outperformed registered Republicans in the U.S. Senate primary by 35,542 votes. More than 23 percent of Montco Democrats turned out on May 17, compared to just 16 percent for the GOP.

Before 2016, the Delaware Valley suburbs made up a greater share of the Republican party’s votes than the Democrats. But this year, Democrats earned 24 percent of their total vote from the Philadelphia suburbs, whereas Republicans picked up just 20.1 percent.

There’s a similar trend among 18 to 24-year-olds. According to the Department of State data, 25 percent of registered Democrats in that age group are found in the Philadelphia suburbs. For Republicans, that number is just 20 percent.

According to GOP strategist Charlie O’Neill, the growing number of Democrats in the suburbs is a result of people fleeing Philadelphia and New Jersey’s high taxes and failed Democrat policies. Unfortunately, he complains, they continue to vote Democrat.

According to O’Neill, the 2022 mid-term election will come down to whether voters believe the country is headed in the right direction. Even in the light of the Supreme Court’s overruling of Roe v. Wade, he doesn’t see the election being swayed one way or the other.

“No matter how the Democrats and media try to change the conversation away from a failing economy, historic inflation, and high gas prices, the pocketbook will be in the front of voters’ minds in the Philadelphia suburbs,” O’Neill said.

The 2010 primary election was the most recent statewide primary for both parties.

Even with a Democrat incumbent running for the senate seat, Democrats still outperformed Republicans by 20 percent more votes in the 2010 primaries.

However, primary results aren’t a prediction of which party is going to win come November, for both Republican nominees Pat Toomey for senate and Tom Corbett won the election that year in spite of higher Democrat turnout in the primaries.

Instead, the primary elections indicate party enthusiasm among registered voters.

“One thing we do know about voters in Pennsylvania, they aren’t afraid to split their votes,” O’Neill said. “Just because a voter is registered Democrat doesn’t mean they won’t vote Republican for some offices.”