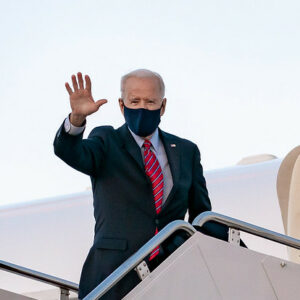 As President Joe Biden approaches his 100th day in office, reviews of his performance from politically active Delaware Valley residents are mixed. In part, this reflects the pre-existing partisan divide. But it’s also a result of the president’s decision to reject outreach from the GOP and rely on straight-party congressional votes  and unilateral executive orders to enact his policies.

“I’m actually pleased that President Biden has been able to get as much accomplished as he has,” said Delaware County Democratic Committee Chair Colleen Guiney. Compared to the previous Democratic president, she says Biden is being “proactive” in getting things done by moving ahead with executive orders, organizing the vaccine rollout and proposing large pieces of legislation.

Dick Bingham, chair of the Chester County Democratic Committee, said he’s been “delighted” by the early performance of the new president.

“I really like Biden’s continuing comments about how we’ve got to be bold,” said Bingham. “We cannot be passive in these times of crises.”

“When President Biden was running, he came across to most people as a moderate. Clearly with 100 days approaching you can see his liberal policies,” said Delaware County GOP Chair Thomas McGarrigle.

Thomas Donahue, executive vice-chair of the Republican Committee of Chester County, said Biden hasn’t stayed true to his early promises. “You go back to the inaugural address, it was about ‘restoring the soul of the nation.’ I think while it was very promising in tone and outlook, the implementation has not necessarily carried over.”

The first test of the new administration came with the American Rescue Plan, which Democrats dubbed necessary to bring an end to the pandemic while Republicans painted it as a liberal wish list. The bill passed the House by a vote of 219–212 with no GOP support (two Democrats also voted no) and the Senate in a 50-49 party-line vote.

Guiney believes that bill is going to help working families more than similar measures in the past.

“It’s actually going to go to those that need help,” she said. “The very wealthy are not going to see the benefits, and that’s okay with me.” She described the plan as a great first step, but cautioned she thinks “more will need to be done.”

“Way too much money,” said McGarrigle. He questioned why parts of the bill were “bailing out union pensions,” when it was supposed to be a COVID relief measure. He also had concerns over what the bill would mean for thenational debt. “I have three sons and three grandchildren and the cost of them to repay what they’re spending… It’s really scary.”

Other issues surrounding the border and gun violence came up after the Rescue Plan passed, as the southern border areas struggled with a migrant surge and multiple mass shootings made headlines nationwide.

Donahue described the administration’s border situation as a “humanitarian crisis” and currently the worst-case scenario by the president’s lack of decision making, in his estimation. “I don’t think they have a plan. I think that’s increasingly being highlighted by the fact that members of [Biden’s] own party are calling him out in the media for lack of action.”

Bingham also said the border situation is a humanitarian issue but appreciates that Biden is looking to root causes of migration. “Terrible poverty and violence that exists in some of the Latin American countries that serve as a major source of these people who are looking for a better, safer life. So I think [conversations with those countries] need to be continued.”

Among local activists, there was some bipartisan agreement. For example, they believe background checks on guns should be strengthened, mirroring Biden’s sentiments in the wake of recent gun violence. Republicans said mental health should be addressed, too.

“These policies for gun laws are supported by the majority of the American people, but a small number of senators can hold up progress,” she said.

The current debate in Washington is surrounding the American Jobs Plan, especially around the corporate tax and high-income bracket rate hikes. Donahue believes if passed, that measure may harm Chester County. “

We’re the wealthiest county in Pennsylvania, so you have a lot of successful business owners who are going to be in that income bracket,” he said.  “That’s at a detriment to their businesses.”

On the other hand, Bingham said the benefits of raising taxes will outweigh the costs.

“If we get our roads, railways, transportation systems, and we get more money into people’s hands, corporations are going to do better,” Bingham said. “This is an investment thing, this is not a handout.”

Guiney said those who she talks to now “have hope,” something that was missing before. She credits that to the vaccine rollout.

“That kind of delivery of yes there are appointments, vaccines… Not only is the federal government providing the vaccine to our county, but our county government and infrastructure are working hard to put it into arms,” Guiney said.

But McGarrigle disagreed with her assessment. Many people he’s talking to are worried about the direction of the country. He said the fact that Biden has issued so many executive orders and Democrats have “boasted the fact they don’t need Republicans” to get things done makes moderates uncomfortable.

The DVJ asked the Republican activists to name something positive they’ve seen from the Biden White House, and the Democrats to point out something negative.

Perhaps underscoring the partisan divide, neither Guiney and McGarrigle would name anything negative or positive respectively that they’ve seen so far.

Bingham said the border situation needs to be controlled.

“That is an issue that could resonate very strongly with those who want to return to the old ways,” said Bingham. “We have to avoid that.”

And while Donahue couldn’t think of something to praise about the Biden administration just yet, he’s hopeful he’ll see something soon.

“I want — as with any president — for this administration to do well and be successful… I would say I’m cautiously optimistic there will be something,” he said.