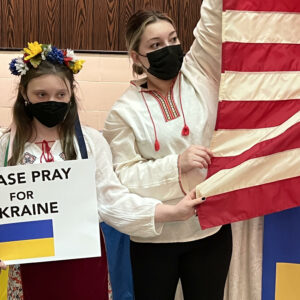 In Bridgeport, Hundreds Rally for Ukraine

Phoenixville resident and teacher Andrij Chornodolsky had a crowd of several hundred on its feet clapping and cheering Sunday at Saints Peter and Paul Ukrainian Catholic Church in Bridgeport, rallying in support of Ukraine.

“I think all of us have to bow our heads in front of the huge sacrifice and valor of the Ukrainian nation totally unanticipated, totally unbelievable, all of the military experts (said) Kyiv would fall in 48 hours.

“Kyiv stands today. Kyiv stands today and Kyiv will stand forever…If we have to rebuild every single building, every single historical relic we have preserved for 1,000 years, we rebuild. We will rebuild Ukraine ourselves if we have to…We must preserve a Christian nation, a nation of democratic values,” Chornodolsky told the crowd. 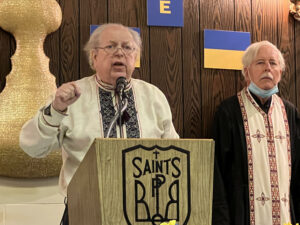 “We are demanding action now. What must be installed around Kyiv is an iron dome. Without that iron dome, Kyiv will be leveled…We must implement a Berlin-style airlift to Ukraine with a continual flow of weapons and support. Now. Not when Kyiv falls…What is happening is a war of attrition and destruction that has never been seen since World War II.”

Congresswomen Madeleine Dean (D-Montgomery) and Mary Gay Scanlon (D-Delaware Co.), were among the officials who attended the event.

Dean took part in a Zoom call with Zelensky and other representatives and senators on Saturday.

“He was exactly as you have seen him in the media, determined. Dignified,” she said. She quoted him saying, “Our values are the same. We want a life with dignity. We want to see our children. We want to sit and have coffee in our homes…We cannot fight this alone…We are not fighting Russia. We are prepared to be their neighbors. Imagine saying that after these past 10 or 11 days. He called upon us for increased sanctions…He said they need air cover, ‘We need jets. We need those MIGs. Javelins, stingers, air cover.’”

“Mr. Putin expected a quick topple of Ukraine’s young democracy,” she said. “Boy, was he wrong. I’m in awe of the resilience of the Ukrainians including their president.”

She called for “overwhelming support,” including weapons, food, fuel, and refuge. 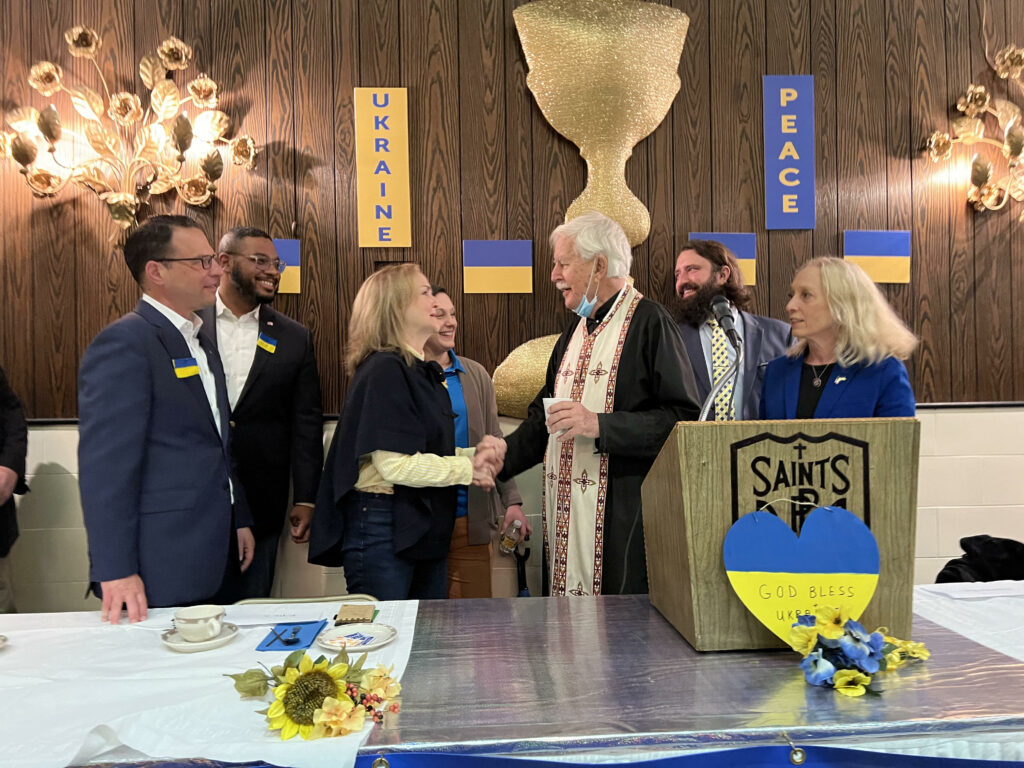 “We are grateful for the presence of President Volodymyr Zelensky, totally unexpected. I did not support him for president…I am totally amazed at what this man has done. We are talking about prosecuting President Putin for war crimes but what we ought to be talking about is nominating President Zelensky for the Nobel Peace Prize.  What a sacrifice we are seeing…Putin put 200,000 troops on the border of Ukraine, poor boys, poor children of Russian mothers. They didn’t even know where they were going…Poor boys going back home in plastic bags.

“We don’t wish that on anyone…But we do wish death on those who invade Ukraine.”

Scanlon thanked the Biden administration for permitting the Ukrainians who are already here special status to remain in the U.S. She supports the people of Ukraine and their “gallant president” in the face of the “unprovoked attack on that sovereign nation.”

“The free world has rallied to condemn and sanction Putin,” she said.

This week Congress will approve a package of humanitarian and military aid for Ukraine, she said.

“We are all united behind Ukraine,” she said.

Pennsylvania Attorney General Josh Shapiro is the great-grandson of two people who emigrated from Ukraine about 100 years ago. Shapiro, a Democrat running for governor, said he was inspired by the Ukrainians fighting for democracy and their president.

And as a prosecutor, he said, Putin should be prosecuted for war crimes.

“My own faith teaches no one is required to complete the task, nor are we free to refrain from it. I think about that each and every day,” said Shapiro. “It means that each of us has a responsibility to get off the sidelines to get in the game and do our part.” 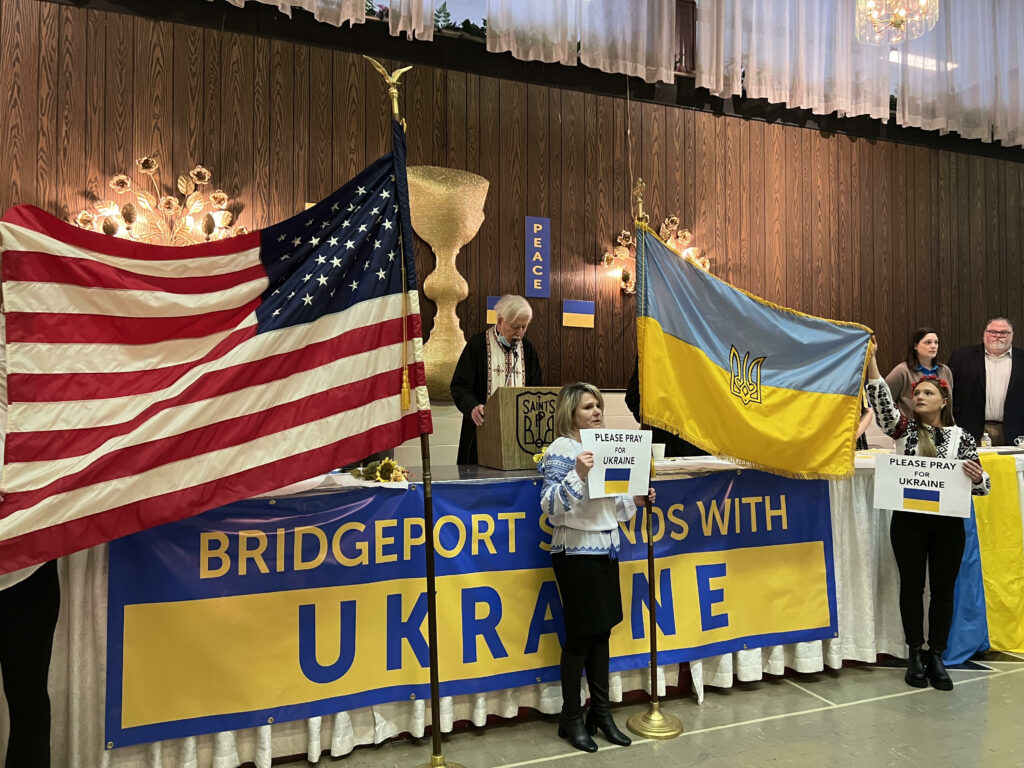 “And so we are gathered here today in the huge numbers that we are you are putting a searing image into the minds of your two congresswomen who will be in Washington D.C. tomorrow and pass a historic appropriation…We are all standing in solidarity with Ukraine,” he said.

The Rev. Dr. Ronald Poplvchak, pastor of the church, said a Ukrainian mother and her 4-year-old daughter whose apartment building was bombed, began to walk and hitchhike 20 miles to the Polish border with “only the clothes on their backs.”

“The mother looked at the little girl. Her right hand was bleeding,” he said.

The child was tightly clutching a handful of sharp pebbles. She told her mother she did not have her doll or her bear and the stones were all she had left from her home.

He thanked the Polish people for taking in one million Ukrainian refugees so far and asked the crowd to donate, as well. The group responded, filling collection baskets with cash and checks. The rally ended with the group singing the Ukrainian national anthem while the American and Ukrainian flags flanked the dais.

Volunteers also collected about three container trucks of donations at the Ukrainian Cultural Center in Abington.

“The place is towering with donations,” Dean said.