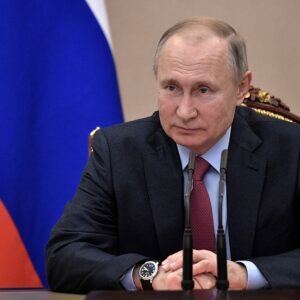 HUTTON: To Save Ukraine, Putin Must Be the Target

Russian President Vladimir Putin is savagely in the midst of a full-scale, unprovoked attack on the sovereign nation of Ukraine, and now is the time to consider how to make him pay a severe price for his crimes.

The focus is squarely on Putin. Now that we are no longer wasting words and time on timid, so-called deterrence we must ultimately seek regime change. He has to go.

Our actions now must so thoroughly complicate Putin’s and Russia’s existence that they cause Russian citizens to act. Despite his tight grip on power, the Russian people have access to information and they almost certainly are not buying his almost crazed rationale for the invasion. Some are already taking to the streets.

Many Russians have family relations and friends in Ukraine. They understand Ukraine represented no threat to Mother Russia. There is no great cause to support.  This is strictly a Putin affair.

Some Ukrainians, like former heavyweight world boxing champions Vitali and Wladimir Klitschko (Vitali is currently mayor of Kyiv) are from a Ukrainian father, who was a colonel in the Soviet Army, and a Russian mother. Both men and their fellow countryman and current heavyweight champion Oleksandr Usyk, are in Ukraine to fight against the Russian army.  It is likely they are not exceptions — many will fight.

Economic actions have been taken and they are continuing to expand.

The U.S., European Commission, France, Germany, Italy, the United Kingdom, and Canada have acted with exceptional fortitude by expelling selected Russian banks from SWIFT, according to CNN. Whatever pain it causes the U.S. will be mitigated by a weaker, less aggressive Russia.

Removing Russia entirely from SWIFT would cripple Russian financial transactions worldwide. The country cannot afford the blow. Its economy ranks outside the top 10 by GDP and is dwarfed by that of the U.S.

The list of painful measures must expand quickly beyond removal from SWIFT. Additional measures could also include: ban Russian ships from international ports; send 90 percent of diplomats home from as many nations as President Joe Biden can influence; ban Russia from international sports (some of which is happening now); discontinue landing rights to Aeroflot; go after the property and bank accounts of Russian oligarchs; ban rail service from and to Russia; ban named individuals from international travel; issue sanctions on any nation that tries to get around the sanctions.

The U.S. can also refuse Russian oil. So can Western Europe.

All measures must have an adverse effect on Putin himself. He makes all the decisions. He is the one.

The Russian people will have to decide whether they want to send their sons to die in a country where the citizens are not real enemies. Russians likely already know that Ukraine has never posed a threat to their country and never will.

They also have to choose whether punishing economic hardships are worth the suffering. Russian citizens gain almost nothing in having a hostile slave state south of their border and may endure years of sabotage and guerilla activities that could become a festering wound.

Our actions supporting Ukraine must also continue as the war continues. We can provide massive amounts of ammunition and logistical resupply surreptitiously. Most immediately, we can provide medical support by allowing the evacuation of casualties to nearby NATO nations.

The international community’s actions must include all NATO nations.

Putin has evolved from a simple KGB thug into a full-fledged war criminal. This conflict will one day end, but Putin’s days as a pariah are forever. He needs to be indicted and brought before an international court.

His directives have resulted in the illegal killing of innocent civilians by engaging in an aggressive war—men were hanged for equivalent charges at Nuremberg.

Sanctions cannot simply end when Putin has fully consolidated his hold on power in Ukraine. They have to be biting and painful for enough time to be seen as punitive and ultimately change Russia’s behavior. There may be some residual deterrence for the next Russian despot who wants to relive the glory of the days of the Soviet empire.