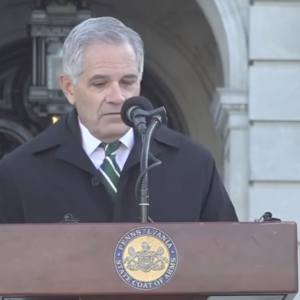 While Philadelphia District Attorney Larry Krasner (D) refused to testify behind closed doors before the House Select Committee in Harrisburg, a member of the House had plenty to say about what she sees as his problematic performance.

Rep. Martina White (R) sent an email last Thursday to House members, detailing findings from the House Select Committee on Restoring Law and Order testimony. She referenced testimony from the Bensalem Police Chief that 42 percent of recent arrests in his town have been Philadelphia residents.

“No matter how you look at it, it is irrefutable that crime has risen dramatically since Philadelphia District Attorney Larry Krasner has instituted his radical progressive policies,” White wrote. “He is derelict in his duty to serve the public interest as the prosecutor on behalf of our Commonwealth in the city of Philadelphia.”

Though White does not serve on the committee, she has been heavily involved in the effort. She sponsored legislation that passed in 2019 to offer “concurrent jurisdiction” to Attorney General Josh Shapiro’s office for firearms cases. However, she noted, “that authority was never utilized by the Attorney General’s Office and crime has continued to surge.”

In addition, she said, violations of existing firearms laws in Philadelphia have seen nearly double the withdrawal or dismissal rate, from 12 percent in 2016 to 23 percent in 2020. That inability or refusal to enforce existing laws has emboldened repeat offenders, who go on to commit more serious crimes.

But Krasner accused the bipartisan commission of being motivated in part by racism, comparing their investigation to political tactics from the Jim Crow South.

“What we see here is the same old playbook, which is about coded and racist messaging,” Krasner said at a Friday press conference. “It’s about blaming the biggest city in Pennsylvania with the most diverse population for having the same national struggle that we have with gun violence everywhere, and even having increases that are less than the committees’ counties.”

At his presser, Krasner also predicted the legislature would vote to impeach him this week, the last General Assembly session before Election Day.

“I would say I wouldn’t be a bit surprised if they go out of their way to vote for impeachment before the election,” Krasner said. “Because that’s politics.”

Following Krasner’s press conference, House Republican Caucus spokesperson Jason Gottesman refuted some of the statements made by Krasner, suggesting he should only have come to the capitol to tender his resignation.

“It’s a slap in the face to the people that Larry Krasner’s office should be protecting that he used time and resources from his office to come here today for a media stunt, after he refused the goodwill invitation from the Select Committee to offer his testimony,” Gottesman said. “These are desperate tactics by a failed politician whose criminal justice philosophy has caused an increase in death, crime, property damage, and the destruction of law and order in Philadelphia.” Before his appearance in Harrisburg, Krasner’s office announced murder charges against a suspect who was previously exonerated and released by the district attorney’s “Conviction Integrity Unit” on a 2012 murder conviction that came with a life sentence.

Requests for comment from Krasner’s office and members of the Philadelphia House delegation went unreturned.

During an interview with radio host Dom Giordano, White gave a shoutout to local law enforcement officers and urged them to “keep your chin up and keep up the good work.”

“The streets are mayhem,” White said. “We’re going to make sure the person prosecuting those bad guys is held accountable and that’s Larry Krasner. He’s a hot mess.”