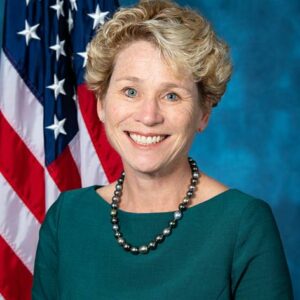 With America hit with record-high gasoline prices and rising inflation numbers, President Joe Biden said in March that he would do something. What did he do? Biden opened the floodgates of the Strategic Petroleum Reserves (SPR).

However, a big portion of that oil is not staying on U.S. shores. Instead, it’s flowing to China and Europe. To remedy that, Senators James Langford (R-OK) and Ted Cruz (R-Texas) and other Republicans introduced the No Emergency Crude Oil for Foreign Adversaries Act.

Now Rep. Chrissy Houlahan (D-Chester/Berks)  has announced she will sponsor the House version of that bill to keep SPR oil in the U.S. instead of allowing it to be exported to countries such as North Korea.

“Like many, I was shocked to learn that a Chinese company was able to purchase oil from our Strategic Reserves,” said Houlahan. “When I called on President Biden earlier this year to release oil to help lower the cost of gas for Americans, I thought this oil would stay within our borders, where it belongs. Today we’re taking the first step toward closing that loophole.”

“What message are we sending to the world when we sell our oil to tyrants waging war on peaceful democracies?” said Bacon. “With inflation, fuel, and cost of living at an all-time high, the Strategic Petroleum Reserve should not be serving our adversaries. We should be expanding American innovation and production here at home.”

Meijer said, “Drawing down our own strategic reserves and providing those resources to our foreign adversaries is both reckless and harmful to U.S. national security interests. Energy security is national security. Our strategic stockpiles should only be used to protect and secure U.S. interests, not to support foreign regimes that seek to undermine our country. I am proud to join this commonsense, bipartisan effort to prevent our adversaries from accessing these strategically important resources.”

Congress lifted a ban on exporting U.S. oil in 2015 but did not exempt the SPR, so that oil is also sold to the highest bidder.

Houlahan said a constituent she talked to at a town hall meeting urged her to do something about U.S. oil going to China.

“Rep. Houlahan is doing it because it’s the right thing to do,” a spokesperson said when asked if Houlahan is breaking with Biden on the issue. The bill Houlahan is sponsoring, “goes a little further. Both bills ban oil from going to Russia, China, North Korea, and Iran. Our bill includes any other country that is being sanctioned by the U.S,” according to her spokesperson.

Guy Ciarrocchi, the Republican running against Houlahan, said, “Of course, we shouldn’t sell our Strategic Oil Reserves to China: why was she asleep at the switch and allowing it in the first place?

“Worse yet, let’s not forget the only reason that our nation’s Strategic Reserve of oil is being used: Biden is using it for politics, not for its real use—war or natural disaster. Biden, Pelosi and Houlahan won’t allow American companies with American workers to produce as much American oil and gas as we can. If Houlahan wants to earn our praise—stop posturing with the press releases and photo ops: reverse your stand and work to get American energy out of the ground: to fight inflation, and improve our quality of life and national security.”