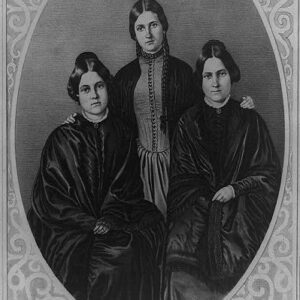 HOLY COW! HISTORY: The Séance Sisters and Their Spooky Scam

It just wouldn’t be Halloween without a scary story, right? Late October is filled with tales of headless horsemen and vanishing hitchhikers.

But here’s a twist: This story actually happened. It scared the dickens out of an entire generation and even led to the founding of a religious movement.

In their first years, the Fox sisters were typical teenagers of their time. Just three girls living in Upstate New York, going to school, doing chores, and leading a quiet life.

Until the day in 1848 when 14-year-old Maggie and 11-year-old Kate frantically ran up to a neighbor on a road. They breathlessly recounted a terrifying story of strange occurrences in their house. There was rapping on the walls. Furniture moved around on its own. They got the feeling that beings from another world were trying to communicate with them.

The neighbor wanted to see the phenomenon for herself and returned with the girls to the Fox home.

The girls’ mother was totally creeped out. She packed up her daughters and hustled them off to live with her sister in Rochester.

However, news of the weird happenings inside the Fox house had gone ahead of the girls. Locals Isaac and Amy Post invited the sisters to their home. Their young daughter had recently died, and they desperately wanted to contact her. The result: another round of rapping and tapping.

The Posts were so convinced the Fox sisters had found a way to contact the departed, they rented a hall. Some 400 people came to hear the strange sounds for themselves.

Word quickly spread. Prominent “seer” Andrew Jackson Davis invited the sisters for a demonstration at his New York City home. He hopped on the bandwagon of the girl’s fame and used it to create Spiritualism. It preached that by contacting departed loved ones you could get glimpses into your own eternal destination. And make corrections, if needed, before it was too late. (Think Ebenezer Scrooge in “A Christmas Carol.”)

The sisters had stumbled upon a lucrative living. Kate and Maggie took the act on the road to Cleveland, St. Louis, and Washington. Folks shelled out a then staggering $1 each to hear about the newly opened door to the “other side.” Leah held forth in New York City, whose Who’s Who paid big bucks to sit in on her private seances.

But not everyone was convinced. The journal Scientific American dismissed them as “The Spiritual Knockers from Rochester.” (“Knockers” was slang for “hicks” at the time.)

The Civil War led to Spiritualism’s heyday. With the country awash in nearly 700,000 deaths, grieving families eagerly wanted to hear from the fallen. Even first lady Mary Lincoln is said to have held seances in the White House, trying to reach her dead sons Eddie and Willie.

There were plenty of doubters, but nobody ever exposed how the sisters made the mysterious sounds. For a while.

Then personal rivalry prompted their undoing.

Kate developed a drinking problem that grew so bad, Leah and top spiritualist leaders publicly scolded her. Maggie was furious at the way Kate was treated; so furious, in fact, she wrote a tell-all expose published in October 1888 in the New York World (which paid her a whopping $1,500 fee).

Maggie spilled the beans. She admitted that, as girls years before, she and Kate had tied apples to strings and dragged them along floorboards to make the thudding sounds. She told how they advanced to secretly moving their knuckles and toes to create tapping noises.

It was all a hoax.

The bombshell revelation caused a major schism among Spiritualists. Maggie recanted her confession a year later, which only increased the number of people fleeing the movement.

As Americans prepared to enter the 20th century, Spiritualism’s glory days were over.

They still talk about things that go bump in the night at this time of year. But be sure to check for apples with strings tied to them, just to be safe.