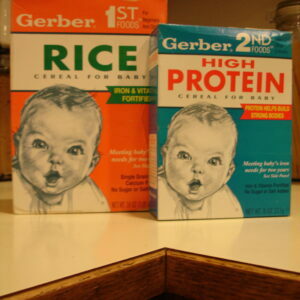 Ann Turner Cook may not be a household name, but her face has been found in nearly every Amercian household for almost all of the 95-year-old’s life. (She celebrated her birthday late last month.)

Ann was the inspiration for the Gerber Baby.

“You must have been a beautiful baby,” an old song once said. And little Ann certainly was lovely. So lovely, in fact, that when she was just a few months old a neighbor decided to sketch her.

Dorothy Hope Smith was a noted commercial artist. Among her many artistic accomplishments was drawing a series of famous “Ivory Soap Baby” illustrations for Procter & Gamble.

Dorothy appreciated the twinkle in little Ann’s eyes and set about rendering her likeness in charcoal. Everyone in the neighborhood agreed it was a lovely sketch.

And so it might have remained until some unknown advertising genius came up with a bright idea in 1928. Gerber was preparing to launch a new line of baby foods. It held a competition to find the Gerber Baby.

Friends told Dorothy she should submit her sketch of baby Ann. The artist argued it was just a preliminary drawing and wasn’t finished. But she apparently thought, “What have I got to lose?” and mailed off the etching along with a letter asking what age baby they wanted and how big the ad would be. She said she would finish the sketch later if it was chosen.

The company was flooded with thousands of entries showing little darlings of shapes, ages, and sizes. And Gerber picked Ann’s portrait from them all. Dorothy was flattered and promised to complete the drawing. “Don’t touch it!” the Gerber folks told her. They loved the drawing’s simplicity and directness.

With her infant modeling days behind her, Ann went on to earn several college degrees, including a master’s in education. She taught English at elementary, middle, and high schools in Florida for many years, and even found time to write a series of mystery novels set on Florida’s Gulf Coast. While her early claim to fame was always fun to talk about, she never traded on it — well, except perhaps for a featured guest appearance in a 1990 episode of “To Tell the Truth.”

On a related note, a persistent Urban Myth surrounds the famous face on the baby food bottle. It says 1940s movie tough guy Humphrey Bogart posed for the drawing as an infant. You know, the star who portrayed cynical Rick Blaine in “Casablanca,” shady detective Sam Spade in “The Maltese Falcon,” and grizzled Charlie Allnut in “The African Queen.” Not the kind of image that appeals to moms buying food for babies.

But it’s easy to see how the mix-up started. Bogart’s mother Maud Humphrey was a well-known commercial illustrator in the early 1900s. She was so successful, her artwork earned more money than her husband, a cardiopulmonary surgeon, made! And she did, in fact, use a drawing of her young son in a Mellins Baby Food advertising campaign. But Bogart was not the Gerber Baby.

So, a belated happy 95th birthday, Ann. As Bogie would have said, “Here’s looking at you, kid.”