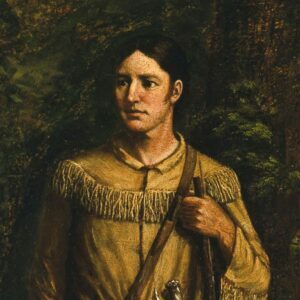 If the title Congressional Truth-Stretching Champion is ever awarded, there would be an Olympic-scale competition to claim it. Politicians in general, and members of Congress in particular, take a certain wiggle room with telling the truth.

Americans are tolerant of that — to a point. And when that point is exceeded, things become very unpleasant, very fast.

Just ask George Santos. The newly minted congressman allegedly fibbed about big (and important) chunks of his resume, his family history, and much else. He is quickly finding Capitol Hill is not an emotional support group for those who find themselves in increasingly hot water.

Santos is far from the first congressman to inflate his story. So, who was history’s worst offender? A strong case can be argued that dubious distinction belongs, hands down, to David Crockett.

You know. Coonskin cap. Bear fighter. Hero of the Alamo. And member of the House of Representatives.

Everything we know about Davy Crockett is a chemist’s mixture of truths, half-truths, tall tales, myths and outright lies told for political gain.

Start with his nativity. “Born on a mountaintop in Tennessee.” Though in fairness, that bit of misinformation can be blamed on Walt Disney’s crew, who enshrined it in the “Ballad of Davy Crockett” in 1954. The song became a hit as the theme of Disney episodes featuring Fess Parker as the famous frontiersman. (Parker also later portrayed Daniel Boone on the tube, forever confusing Baby Boomers who mixed up the two portrayals.) It was part of the 1950s “Crocket Craze” that grew so white-hot that imitation coonskin caps were selling at 5,000 every day. But we are getting ahead of ourselves.

Crockett was born soon after the Revolutionary War in a state that no longer exists. In fact, it never existed. The Free State of Franklin consisted of several East Tennessee counties that broke off from North Carolina. It fizzled when Congress didn’t admit it to the Union and settled for becoming part of the Volunteer State instead.

Far from being “born on a mountaintop,” he arrived at his family’s home deep in a small valley. And while Crockett never claimed to have killed a bear “when he was only three” as his lyrical resume insists, he was indeed a hunter.

And here’s where things grow murky. Davy Crockett was a prolific and skilled gamesman. So much so that he began making a name for himself as a hunter while still a teenager.

But Crockett was born with the politician’s inherent burning desire to make a good thing better. Tales about his hunting ability grew taller with each telling.

He claimed to have killed 105 bears in a year. He said he killed one at midnight, either with a knife or his bare hands. Which may have happened. Or maybe not. Or perhaps it kinda sorta happened. Who knows?

His entire life is a 21st-century fact-checker’s nightmare come true. His autobiography is no help. It is grandly titled “A Narrative of the Life of David Crockett of Tennessee: His Own Story.” Except it was ghostwritten by a Kentucky congressman for political purposes. Even a popular play called “The Lion of the West” wavered between truth and fabrication.

This much is certain. After being narrowly defeated for re-election to Congress in 1835, he famously stormed, “You can go to Hell — I’m going to Texas.” And so, he departed on a one-way trip to immortality.

Even his death is shrouded in historical ambiguity. That much, at least, cannot be blamed on Crockett. Tradition tells us all the Alamo’s defenders died fighting when the old crumbling mission was stormed by Santa Anna’s army on March 6, 1836. Some Mexicans claimed Crockett was one of six men who surrendered and later stood against a wall and was shot. Others dispute that claim. Regardless of how his story ended, he was no coward.

Nearly 200 years later, it’s impossible to sort the fact from fiction in Davy Crockett’s adventures. In many ways, it personifies “The Man Who Shot Liberty Valance’s” most famous line: “When the truth becomes legend, print the legend.”

Davy would have agreed.