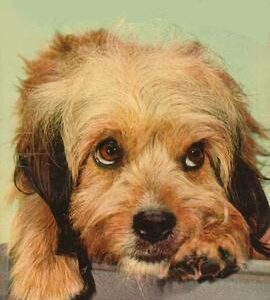 If you’re of a certain age (Baby Boomers take note; I’m talking to you), you’ll recall a hit TV show’s conclusion. For seven seasons throughout the 1960s, “Petticoat Junction” ended with an antique steam train chugging through the countryside as closing credits were plastered over it. A dog was seen running along the tracks, gamely trying to catch up with the Cannonball.

It was cute and sad simultaneously. Try though he might, week after week and year after year, that dog never did catch the train.

In many ways, it was fitting for the shaggy little mutt. Because although he was seen on both the big and small screens, he never got the recognition he deserved.

Tinseltown has gone through a series of canine crushes. We remember Terry, the Cairn Terrier who wormed her way into hearts by playing Dorothy’s beloved Toto in “The Wizard of Oz.”

We can’t forget Skippy, the Wire Fox Terrier who almost upstaged Myrna Loy and William Powell. Though he starred in dozens of other films (including 1938’s Katherine Hepburn-Cary Grant screwball comedy classic “Bringing Up Baby”), he’ll always be remembered as Asta, Nick and Nora Charles’ canine companion in all six “Thin Man” movies. (Plus, his name lives as a perennial crossword puzzle answer. Though in fairness, there are only so many four-letter palindrome pet names out there.)

And there’s definitely not time to go into the kennel full of Collies and German Shepherds who played “Lassie” and “Rin Tin Tin” over the years.

But how about Higgins? That one probably doesn’t ring a bell. And that’s a shame.

There was something special about the little brown and black dog that day in 1960 when animal trainer Frank Inn spotted him in the Burbank Animal Shelter. He was what polite society refers to as a “mixed breed,” but everyday folks call a “Heinz 57.” Fluffy and black and tan, he bore the markings of a Border Terrier. In the days before doggie DNA tests, there was no way to know for sure, but Inn thought he recognized a touch of Schnauzer and Cocker Spaniel, with a dash of Miniature Poodle thrown in, too. He was named Higgins.

Though he may have been cute, he didn’t coast on his looks. Higgins had brainpower, too. He could display a range of emotions and even learned to sneeze and yawn on cue. In fact, Inn called him the smartest dog he ever worked with. That was quite a compliment because Frank Inn was no run-of-the-mill animal trainer. During his 50-year career, he trained dozens of Hollywood A-List pooches including the aforementioned Skippy/Asta. But it was Higgins he most admired.

Inn was proud when Higgins was cast as the family pet in “Petticoat Junction” in 1963. The role was such an afterthought the show’s writers didn’t even give the character a name; he was simply called “dog.”

Higgins didn’t mind. He turned in a performance that gave his human co-stars a run for their money, wowing viewers with his intelligent tricks while melting their hearts with his lovableness. He became such a fan favorite he popped up on “The Beverly Hillbillies” and “Green Acres” and even made the cover of “TV Guide” magazine.

While he got along well with everyone on the set, Higgins enjoyed a special rapport with Edgar Buchanan, who played curmudgeonly Uncle Joe Carson. The two shared a vibe of genuine affection viewers could feel.

Time passed. “Petticoat Junction,” the “Hillbillies,” and “Green Acres” eventually fell victim to the so-called “rural purge. (Actor Pat Butrum said, “CBS canceled everything with a tree in it.”) By 1971, cornball comedies were out and new, edgy sitcoms like “All In the Family” and “The Mary Tyler Moore Show” were in.

Dog roles began drying up, too.

But Fate had one last happy smile in store for Higgins. He was picked to play the title role in 1974’s hit family movie “Benji,” the tale of a lovable stray who meanders around a small Texas town.

It also reunited Higgins and his BFF Buchanan. Both were way past their prime by then. Buchanan was entering his 70s and Higgins was 16. It was the last movie either made.

Maybe Higgins understood it was the end of the line. Dogs sometimes sense these things. If you look closely, you’ll spot a certain tenderness in his eyes while gazing reassuringly at his buddy as if to say, “It’s ok, old friend. Let’s call it a day.”

(The movie was also the last time Frances Bavier, the beloved Aunt Bee from “The Andy Griffith Show,” ever acted.)

Higgins went out with a bang. His final performance made the movie such a huge hit it spawned an entire “Benji” franchise of sequels with the first few starring Benjean, his daughter.

Higgins passed away the next year just weeks shy of his 18th birthday. He had, as they say in acting circles, a good run.