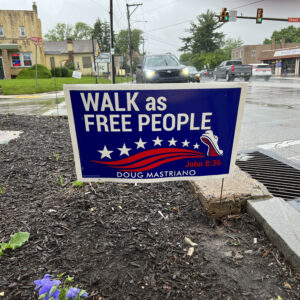 This may be a Pennsylvania primary for the history books—at least for Republicans.

For Republicans, it was a different story.

Trump-backed state Sen. Doug Mastriano won with a commanding lead in the crowded field of seven in the governor’s race. President Donald  Trump’s choice for the Senate nomination, Dr. Mehmet Oz, remained statistically tied with Dave McCormick, a hedge fund CEO as of Wednesday morning. Kathy Barnette, author and Fox News commentator, surged toward the end of the race but came up short.

“As for the Senate race, Barnette’s strong finish took a toll on Oz and helped create the extremely tight race that has not played out. If Oz does prevail it certainly will be the product of Trump’s intervention and give the former president a major victory,” said Christopher P. Borick, professor of political science and director, Muhlenberg College Institute of Public Opinion.

Richard Booker, a former Radnor Township commissioner and school board member who remains active in Republican politics, said, “Twenty-two thousand mail-in ballots in Lancaster County will need to be counted – and those could benefit McCormick. Also, statewide about 8 percent of the ballots remain to be counted. It is obvious, that the complex and cumbersome paper ballot system in Pennsylvania is not a panacea to make election procedures transparent as promised.  The change to paper ballots has to be one of the worst changes implemented by the legislature this century.” 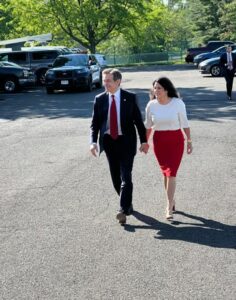 Dr. Mehmet Oz and his wife, Lisa, walking to vote.

Jeff Jubelirer, a political consultant, said the GOP Senate results might not be known for a few weeks if a recount is needed.

“The news cycle will focus on the race, thus potentially helping take some of the focus off of John Fetterman’s health, which is clearly an issue that will be ‘on the ballot’ come November without a clearer understanding of the lieutenant governor’s condition.”

“Regardless of who emerges, the general election will be competitive and the Trump factor will weigh heavily again. Unlike with Mastriano, however, expect either Dr. Oz or McCormick to maneuver at least a little more to the center to try and capture swing voters and disenchanted Democrats who would be apt to split their ticket and go with them and Shapiro.”

“They chose a more progressive path by convincingly supporting Fetterman, thus setting up what looks to be a very competitive general election matchup with whoever emerges on the GOP side,” said Jubelirer. “The fact that Fetterman overwhelmingly won despite receiving sparse support from fellow Democratic officeholders shows the electorate was not persuaded that a more moderate candidate like Connor Lamb was the right direction to go. Perhaps that is a response to what I am sure many feel right now about the direction of the country and the lack of action on meaningful Democratic issues in Congress and from the Biden administration.”

Daylin Leach, a former Democratic state senator, said, “The results of this year’s U.S. Senate primary were reflective, in a somewhat less intense way, of trends we’ve been seeing around the country for several years. Specifically, our nation is becoming increasingly ideological and tribal. As we become more politically divided, we demand more purity from our candidates and become less tolerant of deviation from the chosen line.”

“I say ‘chosen line,’ because in the case of the Republicans, it’s not really the Republican ‘party line’ that matters. It’s loyalty and fealty to one single personality. If Donald Trump is opposed to…say free trade, a GOP candidate had better be opposed to free trade, regardless of what Republicans have historically been for. The same is true with acknowledging the legitimacy of the 2020 presidential elections, which most Republican candidates were extremely reluctant to do.” 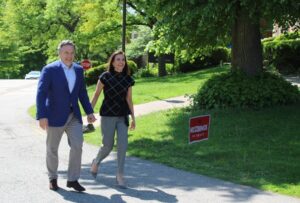 Dave and Dina McCormick walking to vote in Pittsburgh.

Meanwhile, “the Democratic side is not operating on a cult of personality. But Connor Lamb still struggled to gain traction because he wasn’t considered pure enough. I had numerous people tell me they couldn’t support him because he was “way too conservative”, despite the fact that he is pro-choice, supports ending the filibuster, supports Build Back Better, etc., and had a very mainstream Democratic voting record in Congress. This sort of ideological rigidity would have made it extremely difficult for a Bob Casey to be nominated if he were running for the first time today. While I personally am actually more on the left side of the Democratic Party, I do worry that our increasing polarization will lead to more governmental dysfunction going forward. And that’s the last thing we need.”

In the Republican race for governor, former Congressman Lou Barletta came in a distant second to the Mastriano juggernaut.

“Doug Mastriano’s victory wasn’t a big surprise, but even with candidates dropping out, he still failed to garner a majority of the vote,” said GOP consultant Charlie O’Neill. “He will still need to prove to 55 percent of Republicans why they should feel comfortable with him in the fall, as well as independents and moderate Democrats. Mastriano’s victory speech addressed a concern many have raised, his ability to fundraise against Josh Shapiro’s 10-plus million dollar war chest. His proclamation that money doesn’t win elections will certainly be put to the test.”

Borick said, “Mastriano offered voters a hyper-MAGA alternative that allowed him to dominate among that key group in the Republican electorate. His full-blown culture warrior status is not a natural fit in a Pennsylvania general election, but he has a cycle that is great for the GOP and if economic issues like inflation remain troubling in the fall he could ride a wave that allows him to be quite competitive with Shapiro.”

Republican strategist Craig Snyder, who briefly threw his hat in the ring for governor, said, “America’s singular and long splendid political system — most notably its ability for improving and self-correcting overtime — was born in Pennsylvania. The Pennsylvania primary elections may have just seen that system break.

“In the GOP gubernatorial and Democratic Senatorial contests, clowns and crazies carried the day–a ‘Christian Nationalist’ and a ‘socialist’ in Ben Franklin’s shoes. As for the Senate race, “it is perfectly clear that nearly all the voters endorsed insurrectionist lies about the 2020 presidential election.

“It all shows how a two-party system, plus closed and winner take all primary elections, plus the damnable egos of many who seek office for the wrong reasons, plus the learned disdain for politics among the great majority of our people, all add up to giving vastly disproportionate power and representation to a relative handful of the angriest among us,” he said.

Jubelirer said Mastriano’s win “sets up a difficult predicament for the Republican Party in Pennsylvania and for Republican fundraising groups (e.g. Republican Governors Association) moving forward. Do they bite their lip and fully support Mastriano despite trying to take him down in the primary? Do they stay ‘out of it,’ so to speak, thus putting all their chips in the U.S. Senate race and not potentially anger swing voters who could make the difference in that contest? Or do they go ‘all in’ and risk angering more moderate Republicans and swing voters who appear to be more inclined to generally support Republicans in 2022?

“The results of the election prove that Trump (or at least Trumpism) is still alive and well in the Pennsylvania GOP. While Trump’s endorsement came late and was negligible to the outcome, it still shows the power of his message and base. The challenge for Mastriano now is how does he expand his coalition?”

“His first opportunity was an abject failure–using his victory speech to outline far-right priorities he’d tackle on day one of his administration–priorities that I believe are not shared by the majority of Pennsylvanians,” Jubelirer added.