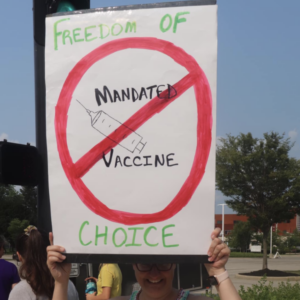 “Tyrannical politicians like Joe Biden and Tom Wolf are using their power to dictate personal health decisions,” said Leo Knepper, political director of Citizens Alliance of Pennsylvania. “In times like these, we need rational thought leaders, not knee-jerk reactionaries who want to control our every move. I encourage all Pennsylvanians to sign the CAP petition immediately. CAP will continue to fight this battle until all mask and vaccine mandates are banned in Pennsylvania.”

“The petition is just the first step for us,” Knepper said. “We’re going to add additional resources to our efforts as we move forward.”

However, recent polling shows a majority of people are in favor of both mask and vaccine mandates. And most registered voters are also very concerned about the pandemic. Some 56 percent agree with Biden’s mandate for businesses with 100 or more employees to either require their workers to be vaccinated or frequently tested for COVID-19.

“The primary reason that the mandates are a bad idea is that they are fundamentally at odds with individual liberty and personal autonomy,” Knepper said. “What typically gets overlooked when it comes to mandates is that they ultimately rely on government’s monopoly on the use of force in order to ensure compliance. Individuals should not be coerced into making medical decisions. The U.S. Supreme Court case used to justify these mandates went on to be applied as precedent to affirm the legality of state-sanctioned eugenics programs. Stating it’s a slippery slope isn’t a rhetorical device. It is a historic fact.”

In the case Knepper mentioned, Jacobson v. Massachusetts, 1905, the high court held that a Massachusetts man could be fined $5 for refusing the smallpox vaccination. That case was used as the primary justification for Buck v. Bell in 1927. The Buck decision includes the horrific statement: “The principle that sustains compulsory vaccination is broad enough to cover cutting the Fallopian tubes. Jacobson v. Massachusetts…Three generations of imbeciles are enough.”

Buck v. Bell led to some 70,000 forced sterilizations, which were part of the eugenics movement championed by early 20th century progressives.

Wolf’s office did not immediately respond when asked to comment on the petition, which Knepper said does not have a deadline.

“Our initial goal is to obtain 1,000 signatures,” Knepper said.