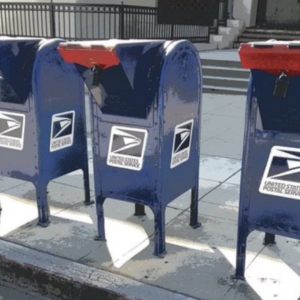 A debunked conspiracy theory about a Trump plot to use the U.S. Postal Service to steal the election has made its way from the fever swamps of the internet to mainstream Pennsylvania politics, with the help of some mainstream politicians.

“The postmaster general is injecting a dangerous breed of partisanship into the United States Postal Service, an essential service afforded to all Americans as mandated by the Constitution,” Houlahan said. She is currently calling for Postmaster General Louis DeJoy to resign.

Her fellow Democrat, Sen. Casey, called the situation at the USPS a “five-alarm fire.”

“What we don’t need is folks like Mr. DeJoy and anyone that works with him in the top brass messing with the post office, messing with mail delivery, questioning whether or not mail ballots will get to people,” Casey said.

Pennsylvania’s attorney general accused the president of “trying to undermine the vote for some,” and he’s joined a lawsuit targeting the Trump administration over ongoing reforms inside the postal system.

In fact, the cry “dismantle the post office” is a unserious as the demand to “defund the police.” And the Democrats making these charges know it.

Given that these claims have been repeatedly debunked by Democratic-friendly media outlets like USA Today, why are these mainstream politicians jumping on board this crazy train, alongside less-than-stable celebrities like Marianne Williamson and Alyssa Milano?

The facts aren’t in dispute:

Far from stopping the flow of mail, the Trump administration — like the Obama White House before it — is dealing with a postal system that’s already dying. Overall mail volume is down about 30 percent and first-class mail volume is down by 50 percent over its 2001 peak.

The result of these plunging volume numbers is a financial fiasco that Houlahan and her fellow members of Congress have seen coming for years but refused to fix.

The post office has lost $78 billion since 2007. The General Accounting Office estimates the USPS is now $161 billion in debt, the vast majority coming from its notoriously generous retirement benefits. No wonder Postmaster General Louis DeJoy put in new rules to cut costs and limit overtime.

“Nationally, the number of collection boxes declined by more than 12,000 in the past 5 years,” the post office wrote in 2016 — during the Obama administration.

Is it really a surprise that, with mail volume dropping by half, seven sorting machines in Philadelphia would be re-purposed or even sold?

As for Casey’s suggestion that Trump is somehow undermining the mail system to influence the November election, that tin-foil-hat theory doesn’t survive simple scrutiny or basic math.

Here’s Nick Gillespie of Reason Magazine with the math part:

“Assume, for the sake of argument, that the same number of votes will be cast this year as in 2016. Even if all voters used the mail and posted their ballots on exactly the same day, that would comprise only 30 percent of the amount of mail the USPS says it processes every single day.”

But even if Trump did have a nefarious plot to slow down the mail, even if every blue mailbox were pulled off America’s street corners, how would that stop people from mailing in their ballots?

Postal workers are still picking up the mail. Post offices aren’t shuttered. And the photos floating around on the internet of post boxes hauled away on trucks aren’t the sinister images Democrats say they are. America’s first-class mail — what’s left of it, anyway — is still flowing.

Despite Casey’s alleged “five alarm fire,” the real threat to November’s election isn’t mailing the ballots; it’s counting them once they arrive. That’s why two congressional races in New York were still in dispute six weeks after the vote as officials struggled to process the mail-in ballots they received.

Many observers fear that, between COVID-19, a surge in voting by mail and potentially close races in swing states like Pennsylvania and Wisconsin, it may take far longer to determine a winner in November than usual. And the longer that process takes, the more Americans may doubt whether the election was fair.

President Donald Trump is widely criticized for stoking suspicions that undermine Americans’ confidence in their democracy.

Why are Casey, Shapiro and Houlahan doing the same thing? And why aren’t they being criticized for it?

Perhaps because it worked? On Tuesday, Postmaster DeJoy announced he’s halting his reforms until after the November elections.

It’s a partisan win for Democrats sowing doubt about our election system. But it doesn’t do anything to fix the fundamental problems of the post office.