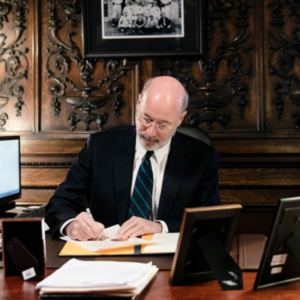 Gov. Tom Wolf signed legislation Friday postponing the state’s presidential primary elections from April 28 to June 2, amid ongoing concerns over public gatherings and the spread of the coronavirus.

The legislation was passed unanimously by the Pennsylvania state House and Senate earlier this week, with many legislators casting their votes remotely due to social-distancing concerns.

“Delaying this year’s primary election as several other states have done is in the best interests of voters, poll workers and county election officials,” Wolf said. “I commend the General Assembly for acting quickly on this critical legislation. The Department of State will continue to work with local election officials to ensure Pennsylvania has a fair and accessible election.”

“Prior to the proposed change, we received a number of calls from poll workers who were not willing to work the primary election if it was in April,” said Elizabeth Preate Havey, chair of the Montgomery County Republican Committee.

Lawmakers chose the June date to allow the state to delay the primaries as long as possible without interfering with the national parties’ conventions.

Another key change of the bill will permit county elections officials to start processing mail-in and absentee ballots at 7 a.m. on Election Day. Voters will also have the option to vote by mail without giving a reason, and the state has created an online application where citizens can request an absentee ballot.

Pennsylvania joins a growing list of states and territories that have changed their election calendars as the virus spreads — including Louisiana, Connecticut, Delaware, Indiana, Georgia, Kentucky, Maryland, Ohio, Rhode Island and Puerto Rico.

Thanks to broad and swift agreement on the move, Pennsylvania was able to avoid confusion, emergency shutdowns and court cases as seen in neighboring Ohio. Republican Gov. Mike DeWine ordered the Buckeye State’s primary postponed on the eve of the scheduled March 17 election.

“During this time when we face an unprecedented public health crisis, to conduct an election tomorrow would force poll workers and voters to place themselves at an unacceptable health risk of contracting coronavirus,” DeWine said at the time. A judge ruled that DeWine’s actions were illegitimate, but the Ohio Supreme Court stepped in to back the governor’s decision.

Ohioans will now vote on April 28, in an election that will largely be conducted via mail-in ballots.

Pennsylvania politicians will now have to navigate this new electoral landscape, as the scope of the coronavirus crisis continues to grow.

Less than an hour after Wolf signed the bill, the Pennsylvania Department of Health published updated information on its website showing the total number of cases of COVID-19 in the state rose from 1,687 to 2,218.