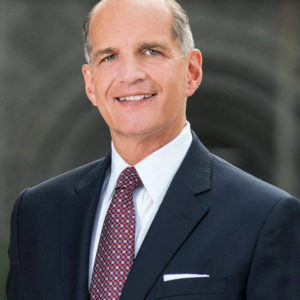 Pennsylvania’s top GOP official tells Delaware Valley Journal that, despite the political focus on the suburbs, he believes President Trump’s real opportunity to grow his support is in places like Philadelphia.

As President Trump has begun to draw an urban versus suburban divide this year, Pennsylvania GOP state chairman Lawrence Tabas says America’s largest downtowns are a great untapped area of support that the president should be making more appeals to.

“I’ve encouraged the president — I’ve had the chance to speak with him in the past — to come to Philadelphia,” said Tabas. “I also think he should go to all the major cities because his message resonates with the African-American, the Hispanic, and the Asian communities with what he has done with the economy and to build them up.”

Tabas, who lives in Philly, made his comments during an interview for the upcoming Delaware Valley Journal podcast, which will be released on Thursday. He just returned from the “in-person” portion of the Republican National Convention held in Charlotte, North Carolina, but he’s continuing his duties as a delegate online.

“I actually think the president’s approach, which has been to uplift the economic well-being of all Americans, [is witnessed] in the fact that in his first almost three years before the pandemic, the unemployment rate amongst African-Americans was the lowest in 60 years, amongst Hispanics in 50 years, among Asian-Americans and women the lowest in our lifetime.”

“There have never been more Black and Hispanic Americans in the workforce, Friday’s Labor Department job report showed,” a CNBC report from October of last year noted — just months before the first coronavirus cases would appear in the United States.

“The jobless rate for Hispanics hit a record low of 3.9% in September, while African Americans maintained its lowest rate ever, 5.5%,” the report went on.

The GOP’s loss of its House majority is often attributed to a poor performance in the suburbs: a district in suburban Oklahoma City, Oklahoma — a state so “red” that all 77 counties had voted against Barack Obama in both of his presidential elections; several districts in the reliable Republican bastion of Orange County, California, aka “Reagan Country.”

In the Delaware Valley suburbs, Democrats have been on a steady march, winning majorities on all of the county commission boards in all of the four collar counties, some of which had been in Republican control for decades.

Faced with those realities in a re-election year, Trump has tweeted that Democratic nominee Joe Biden would “abolish the suburbs.”

“Biden will destroy your neighborhood and your American Dream. I will preserve it, and make it even better!,” Trump tweeted.

“I don’t see it so much as suburban versus Philadelphia,” Tabas told DVJ.

“I spent a lot of my life in Montgomery County, so I’ve experienced both. I see it more as the economic base of southeastern Pennsylvania like other bases. You uplift — as the president did before COVID — the entire population economically. And doing that helps to unite us, helps to dispel disparities in our nation, and helps to break down the barriers that unfortunately do lead to unrest, which we have to make sure that every American feels that she or he is fully available to participate in the American dream.”

The latest protest point originates from Kenosha, Wisconsin, where three people were shot — two of them fatally — in protests coming after local police shot an unarmed black man, Jacob Blake. Blake’s family says he is now paralyzed from the waist down.

Philadelphia-based commentator Michael Smerconish said on his Wednesday radio show that the events in Wisconsin were the “biggest story of the Republican National Convention thus far — both nights.”