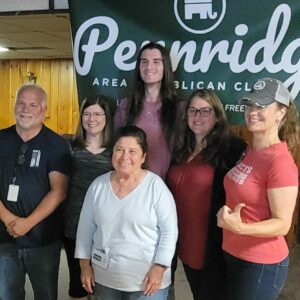 Conservative activist Scott Presler is hoping to create an army of “professional voter registrars” in his likeness to bring thousands of new Republicans to the polls in the midterm elections in battleground states like Pennsylvania.

The son of a retired Navy captain said he has gotten so good at the gig that he has even done it from the comfort of a hot tub.

“I’ve got the information, but I’m one human being,” Presler told the Delaware Valley Journal in an interview. “I want to create more Scott Preslers across the country. So my goal is, when I go out and knock with these members of the community, I want to teach them and train them for when I’m not here, so they can do the work without me.”

Presler’s first stop was the Doylestown Borough and Township Republican Club, followed by a speaking engagement before the Pennridge Area Republican Club in Perkasie.

Presler–dressed in a pink shirt, tight blue jeans, and cowboy boots–was quick to open up the voter-registration playbook with a few trade secrets for dozens of the area’s staunchest Republicans.

Part of his strategy centered on trolling prominent Democrats online.

Whenever President Joe Biden posts on his official White House Facebook page, Presler is quick to comment about how the Democrat’s failed “regressive policies” have hurt Americans.

“If you’re unhappy with Joe Biden, then please register to vote at your current address. I’m happy to assist any and all of you in registering to vote,” said Presler, showing volunteers an example of one of his boilerplate “anti-Biden” attacks that got him 480 “likes and hearts.”

It is a telltale sign to Presler that Americans are dissatisfied with Biden – and Democrats in general.

“That shouldn’t be happening. It should be angry faces,” he said. “I used Joe Biden’s White House Facebook page to register a new Republican voter. It’s so fun.”

Before deciding to enter into the realm of political activism, Presler was a dog walker. He remembers when, at age 24, he watched Barack Obama win re-election in 2012 and felt powerless. Then, in 2019, he was inspired to get involved by then-President Donald Trump’s criticism of Baltimore as a “disgusting, rat-and-rodent-infested mess” where no one wanted to live.

Those remarks propelled Presler to organize a cleanup of the city’s “most dangerous streets.” The event was a smashing success, with hundreds of volunteers helping pick up 12 tons of trash in a single day, Presler said.

He’s replicated the event in virtually every big city in America, from Atlanta to Philadelphia. And now he’s doing the same circuit again, this time focused on voter registration.

For his efforts, the Virginia-born political operative has been both praised and vilified as an “American Patriot” and a “nutty MAGA conspiracy theorist.”

He spoke at CPAC in 2021, and in the same stroke, found himself in the crosshairs of the Anti-Defamation League and Southern Poverty Law Center. Presler was slammed for serving as a top strategist for ACT for America, which the ADL and SPLC called one of the largest anti-Muslim hate groups in the U.S.

Presler’s speaking engagements in other cities have attracted counter-protestors and some have events been canceled. But not much of the criticism seems to phase Presler, who pushed back against the idea that he’s anti-Muslim by touting his support for Dr. Oz as he seeks to become the first Muslim to serve in the U.S. Senate.

And the political activist’s supporters don’t scare easily, either.

“We’re used to the name-calling, and we know it never amounts to anything,” said Kim Bedillion, president of the Pennridge Area Republican Club. “The Southern Poverty Law Center goes after many conservative, mainstream Republicans and Christian organizations and paints them as difficult. We’re used to that and we’re used to being called names like ‘deplorable’ and ‘Bible-thumper.’ We take that as a point of pride. If the Southern Poverty Law Center is going after Scott Presler, God bless him. We don’t get defensive; we just do the work.”

He pointed to a “50-50 split” during a recent gas-station drive in a reliably blue part of New York as a potential harbinger for what’s to come.

He told volunteers to think as Democrats do in terms of their target audiences, noting they are likely to be at high schools, nursing homes, and “graveyards,” a riff on the old joke about dead people voting Democrat.

“You’re gonna have a lot of these angry mama bear events. Those people that show up are going to be the doers. Politics needs to be inescapable for the next five months,” he said.