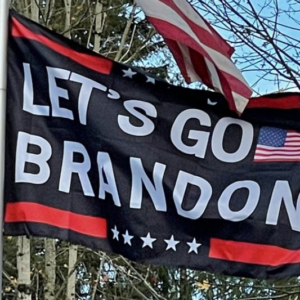 The story was first reported by Fox News, which also obtained a copy of the ad.

McCormick is one of five GOP candidates in the May 17 primary and, as the former chief executive of hedge fund giant Bridgewater Associates, he has got the deep pockets needed to pay for some of the most expensive ad time in television.

“Whether it’s not being able to afford gas or groceries because of record-high inflation, rampant crime in our cities, a dramatic spike in the trafficking of fentanyl and human exploitation across open borders, or the disgraceful lack of accountability for the death of 13 young service members in Afghanistan – these problems were self-inflicted by Joe Biden and the extreme policies of the left,” McCormick told Fox News. “Pennsylvanians have had enough.”

“If there was any doubt the Pennsylvania Senate race would shatter spending records and draw national attention, this Super Bowl ad certainly puts that to rest.” Pennsylvania political strategist Charlie O’Neill. “The ‘Let’s Go Brandon’ chant will appeal to conservative primary voters, but the points the ad makes through news clips appeal to independents and moderate Democrats as well. It’s a strong message from McCormick locally and nationally he is ready to do whatever it takes to win.

“It’s just a shame the Eagles aren’t playing in it,” O’Neill added.

“Let’s go Brandon” is a popular meme on the tight used to mock what many Republicans believe is President Joe Biden’s stumbling performance as president. It emerged when the crowd at a NASCAR race began chanting “F— Joe Biden” and a TV reporter, live on the air, tried to cover up the sentiment by saying the race fans were saying “Let’s Go Brandon.” She claimed it was a reference to NASCAR driver Brandon Brown.

While McCormick, who is from western Pennsylvania,  has blanketed the Delaware Valley airwaves with TV commercials for the last few months, he has also mastered the art of retail politics.  About 50 people turned out to meet him at a VFW post in Bensalem on Saturday morning and McCormick was down-to-earth and jovial as he worked the room, shaking hands and patting people on the back. 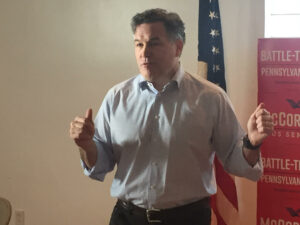 McCormick spoke for about 45 minutes then took questions from the audience for another half hour touching on everything from the economy and energy policy to Ukraine to China.

He has also been the subject of ongoing negative ads that highlighted Bridgewater’s investments in China. McCormick took that criticism on head first, noting it was merely 2 percent of that company’s portfolio. And he sounded like a China hawk, saying that under President Xi, China “the risk has grown.”

“I think President Trump set us on the right direction,” said McCormick. “And he essentially started talking about China as an adversary, not a competitor…So it’s a much bigger risk than it’s ever been before.”

He noted many pharmaceuticals are manufactured in China and 95 percent of our semiconductors are made in Taiwan so we should shift manufacturing of those critical items to the U.S. or trusted allies.

“Do you really want your drugs dependent on whether China is having a good day?” he asked.

McCormick is a West Point graduate who served in Iraq during the Gulf War, where he earned a Bronze Star. He worked at a technology company in Pittsburgh helping that city reinvent itself. He also served the Bush administration, where he was undersecretary of the Treasury for international affairs. His wife, Dina Powell, was deputy national security advisor in the Trump administration.

Meanwhile, Oz, the celebrity doctor who also brings millions of his own money to the campaign, responded to McCormick’s “Let’s Go Brandon” ad via Twitter.  Oz turned the ad back on McCormick, with a clip of his competitor praising Biden’s “tone” and hires for his administration, saying the ad was actually for the Democratic president, aka “Brandon.”