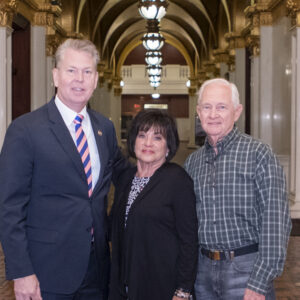 Incumbent state Rep. Chris Quinn (R) faces a tougher race this year after redistricting cut out a swath of the 168th District and made it bluer, a win for Democrats in the legislature.

Quinn told DVJ in a recent interview that former constituents were outraged when they learned he will no longer be their representative.

“How can we fight this?” they asked Quinn said. “What can we do? It made me feel good. It’s a tougher district for me, but I believe the voters if they’re paying attention, they know I’ve done a lot.”

Borowski declined to respond to DVJ’s multiple requests for an interview. Her campaign website is here.

Regardless of the new lines, inflation remains a huge issue among Quinn’s constituents.

“I think, truthfully, when your gas prices have gone up significantly and you’re looking at empty shelves, those are big issues,” Quinn said.

Quinn, who worked in global electronics manufacturing before starting his own insurance agency in 2002, touts himself as an “old-style compassionate conservative” who has authored legislation since first being elected in 2016.

He supports a recent proposal to eliminate Pennsylvania’s closed primary elections that would open up voting for 1.3 million voters who are not registered with either of the main two parties.

The Keystone State is one of nine states with completely closed primaries, which Quinn called “fundamentally undemocratic.”

Quinn also touted the signing of Deana’s Law, which cracks down on the state’s worst drunken-driving offenders.

It was named in honor of Deana Eckman, who was killed in a head-on crash with a repeat DUI offender in February 2019. The law requires consecutive sentences for those convicted of third and subsequent DUIs.

“[The driver] should have been in jail, but because of a broken system, he was out on the road,” Quinn said.

Quinn believes those bills are just a start for him. If re-elected, he said he would be in a prime position, on all the right committees – appropriations, commerce, consumer affairs and insurance – to get even more bills through the legislature.

“I have always tried to rise above partisan politics,” he said. “It’s our job to figure out how to work in the middle. If you look at me as an individual, I’ve been a problem-solver. It’s really been about, ‘How do I get legislation done?’ I’ve figured out how to work across the aisle, how to work with the right and with the left and move bills.”

On issues important to Republicans, like an assault-weapon ban, Quinn is more moderate and supports universal background checks for all firearm purchases.

The father of three daughters said the constant threat of deadly school shootings has exacerbated mental health issues for students who were already traumatized by losing out on time with peers during the COVID-19 shutdowns.

“I don’t understand why someone needs to have an assault rifle,” Quinn said about the preferred weapon of choice for many school shooters while also cautioning that Democrats “want to say that any gun that’s black is bad and evil.”

When it comes to crime, Quinn is on the fence about the attempted impeachment of Philadelphia District Attorney Larry Krasner, who was elected to a second term in 2021.

The lawmaker did not initially support the impeachment effort but was struck by Krasner’s refusal to comply with a subpoena issued by a state legislative committee seeking his ouster.

He claimed the district attorney’s policies have found support among jailbirds who allegedly tattooed Krasner’s name on their arms.