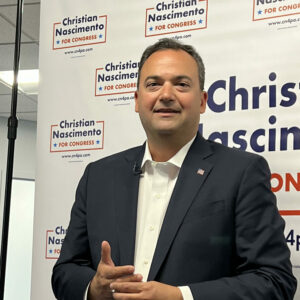 “Small businesses are the life blood of the American economy,” he said. Supply chain issues are plaguing businesses, including Open Tier Systems, an IT service company that hosted the town hall.  That issue, coupled with inflation and the losses from COVID-19 shutdowns, has hit the U.S. economy hard. 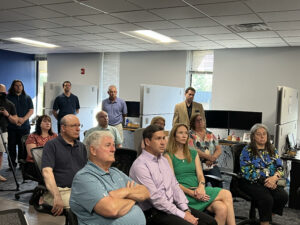 “That’s the story I hear time and time again, whether it’s someone that works for a big national company or the barber shop down the street. Things have gotten more expensive.”

“There’s a common denominator to all of this, and it’s the failed policies of this administration and this Congress,” said Nascimento.  “The president has to be honest. This is not Vladimir Putin’s price hike. You can’t blame all of this on a mad dictator…And the Congress blindly goes along with (Biden). The representative that we currently have in this seat (Dean) votes with the president 100 percent of the time. So she owns this.”

“A lot of it is making sure the American people, whether they’re born in Norristown or Narberth, have a good job, and can build a good life.”

He called for reducing the regulatory burden on all businesses, particularly small businesses and for an increase in the R&D (research and development) tax credits.

“Just think of our government focused on things we need to solve for and that didn’t cede AI (artificial intelligence) to China and other folks who are our adversaries,” he said. Nascimento also called for increased oil production in the U.S. to ease “the pain at the pump,” while investing in renewables.

Instead of using our natural resources Biden canceled the Keystone pipeline and is begging for oil in the Middle East, putting America at the “economic moral and national security mercy of our adversaries.”

Nascimento is a Montgomery County native and first-generation American.  After a career with Comcast, the father of four is running for office to serve the country and “give back,” he told Delaware Valley Journal.

“I’m going to be an independent voice for the people of the 4th (District),” he said. “I am going to go toe-to-toe with Democrats and I’m going to buck Republicans sometimes. I’m going to vote for what I believe is right.”

“We are woefully unprepared for this digital economy,” he said.  Mentioning the nuclear power plant in Limerick, he said anything connected to the internet could be hacked. “Power plants, business, homes, they’re all at risk,” he said. “The amount of harm those cyberattacks can do is breathtaking.”

“There has to be a response,” he said. “You cannot allow foreign actors to hack into government, to hack into individuals living in this country and allow them to get away with it. Right now, Putin, Xi, none of those folks expect there is going to be any repercussions. Because President Biden has shown time and time again they’re right.”

America also needs to compete with China’s “Belt and Road” policy. This country needs to bring back manufacturing so “we are not dependent on the Chinese” for essential products.

“Peace through strength is the only way to deal with China,” said Nascimento.

Local resident Scott Miller asked, “After Friday (Supreme Court decision on Roe) the whole point of the Democratic initiative is going to be a wild-eyed attack on everything, because of federalism, sending things back to the states to be determined, to be debated and voted on…How do you intend to deal with a wild-eyed onslaught?”

Nascimento said he would stay calm.

“We’ve got to change the way we’ve been doing things in the last year and a half,” he said. “The damage that’s being done to the economy and by extension to American families and ultimately to the country is just unprecedented. You may call me naïve but I believe that people are looking for leadership. The screaming and wild-eyed, I think that will work against (Democrats). The country was built on federalism.”

Nascimento said Dr. Oz, who is running for the Senate, has a great line, which the Second Amendment is second because it protects the First Amendment.

“In my mind the constitution says you have the right to bear arms,” he said. “If you’re like me and you’re pro-life, it’s not just pro-birth. It’s making sure that a child has an opportunity to live a life and be safe.”

“I’m not in favor of red flag laws because I think it’s too dangerous for a person’s individual liberty and the constitution says you can’t have your liberty taken away by unreasonable search and seizure.

“The problem we have with guns is…is enforcing the laws we have,” Nascimento said.

A former Methacton School Board president, he said security doors and armed resource officers would help.

“The way you respect life is you help people that are struggling,” he said. “That young man in Uvalde had clearly been struggling for a long time and showed a lot of signs of it and the system failed him. The issue in Uvalde in particular was not a gun issue. It was a mental crisis issue.”

“You don’t have rampant crime if you have prospects,” said Nascimento. “If you look at what’s happening just down the road in Philadelphia. There are really only three problems in Philadelphia: Kenney, Krasner and Outlaw.”