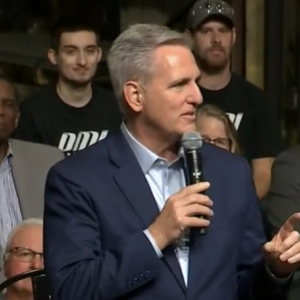 Congressional Republicans went “back to the future” Friday, presenting a platform for the 2022 November election they hope will bring them a majority in the House.

GOP Leader Rep. Kevin McCarthy (R-Calif.) came to Pennsylvania to formally announce the “Commitment to America.” It is an updated version of the 1994 “Contract With America” issued by then-GOP leader Newt Gingrich and the GOP House Caucus. Republicans went on to win control of the lower chamber of Congress that year for the first time since 1952.

“[Democrats] control the House, the Senate, and the White House. They control the committees. They control the agencies,” McCarthy told a crowd at a factory in Monongahela, Pa. “But they have no plan to fix all the problems they created. So you know what? We’ve created a commitment to America.

“What the ‘Commitment’ is, it’s a plan for a new direction.”

Republicans have put their plan in bullet points on a single sheet of paper and even “pocket cards” for members, candidates, and supporters to carry with them.

Each issue is accompanied by specific policy proposals, most of which Republicans have rallied behind for years. Some are vague, like “curb wasteful government spending” and “provide affordable options” for healthcare.

Others are more specific, and designed to put Democrats on the defensive.

For example, the CTA pledges Republicans to “cut the permitting process time in half” for energy infrastructure, a proposal likely to resonate as Pennsylvania families order home heating oil or get their utility bills. And Republicans are highlighting their commitment to increased border enforcement by supporting the construction of more “infrastructure” — a border wall — as well as “ending catch-and-release loopholes and requiring legal status to get a job.”

“Republicans today announced a common sense, pro-growth agenda that will lift up all Americans, and addresses the important issues facing us all,” Nascimento says. “Safer streets, lower costs, better opportunities – these are all things that I hear from the residents of Montgomery and Berks counties every day. I look forward to working with the Republican majority to solve these issues.”

Dean declined to respond to a request for comment about the policies in the proposal, as did Rep. Chrissy Houlahan. Her GOP opponent, former Chester County Chamber of Commerce CEO Guy Ciarrocchi, says the CTA helps turn “this election is a referendum on the issues that we are talking about at our kitchen tables,” says Ciarrocchi.

The Republican defines those ‘issues’ as inflation that is stealing from our paychecks, rising crime and open borders that make us less safe, and children falling behind at school, something Ciarrocchi says is being made worse by parents’ voices being silenced. As a result, Ciarrocchi says he commends the House GOP leadership for providing a path forward on these priorities.

“I will be offering my own’ commitment’ to the citizens of our district in the days ahead – reassuring them both that I share their concerns and have a plan of action to help fix this mess, from day one,” Ciarrocchi said.

McCarthy says Republicans believe they can defeat as many as five Democrats in Pennsylvania’s delegation, including Houlahan and Rep. Susan Wild.

“We want an economy that is strong. That means you can fill up your tank. You can buy the groceries. You have enough money left over to go to Disneyland and save for [a] future that the paychecks grow,” McCarthy said. “They no longer shrink. We have a plan for a nation that’s safe. That means your community will be protected. Your law enforcement will be respected. Your criminals will be prosecuted.”

And, McCarthy noted, the GOP rolled out its plan, “not in Washington, D.C., but Washington County, Pa. Because it’s about you. It’s not about us.”