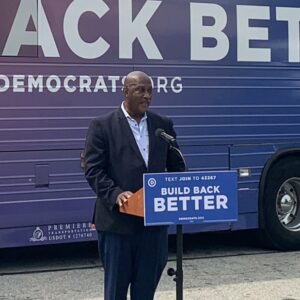 The Democratic National Committee’s “Build Back Better” bus is on a barnstorming tour to boost President Joe Biden’s policies. It stopped in Philadelphia on Tuesday — just in time for Biden’s speech on the troubled evacuation from Afghanistan completed the day before.

“Thanks to President Biden and Democrats, America is building back better than ever, and the DNC is hitting the road to make sure everybody knows that the ‘D’ in Democrats stands for ‘deliver,’” said Harrison. “Because of President Biden’s and Democrats’ leadership, jobs and wages are up, unemployment is down, and middle-class families are benefiting from a major tax cut. We know there is still work to be done and the DNC’s ‘Build Back Better’ bus tour will remind people across the country that it is Democrats who are delivering results for the American people — no thanks to Republicans.”

But the self-congratulatory bus tour, coming just hours after the Biden administration left at least 100 Americans stranded in Taliban-controlled Afghanistan, did not sit well with Republicans. “Biden’s built the Taliban back better,” is a GOP meme on social media, a reference to some $60 billion in arms and vehicles the U.S. military abandoned to the terrorist group in their hasty retreat.

“The DNC’s ‘Build Back Better’ bus tour through Pennsylvania is a slap in the face to the Americans left stranded in Afghanistan and to our Afghan allies who were abandoned,” said RNC spokeswoman Allie Carroll. “It is obvious that the Democrats are attempting to shift focus away from Joe Biden’s botched withdrawal, but Pennsylvanians will not forget the humanitarian disaster caused by his failed leadership.”

Attorney General Josh Shapiro, widely seen as the frontrunner to become the Democrats’ candidate for governor, defended the Biden administration.

“Pennsylvania is the birthplace of our democracy. Because we stood up to protect the right to vote in 2020, Americans were able to make their voices heard in a free and fair election — and they sent Joe Biden to the White House. Pennsylvanians voted for Joe Biden and Kamala Harris because they wanted leadership to bring people together and get things done, and in just eight months, this administration has overseen the creation of millions of jobs and put money back into Americans’ pockets. Democrats at all levels of government are standing up for workers, protecting families, and leading responsibly — and that’s exactly what I’ll do as long as I serve the people of our commonwealth.”

Democrats on the bus tour offered few comments about Afghanistan, and they showed little interest in defending Biden’s record. Instead, they focused on political issues they believe give the president and their party the advantage.

“With our country reeling from the pandemic, President Biden and the Democratic Congress wasted no time to help citizens in need and it came in the form of the big and bold $1.9 trillion American Rescue Plan,” said Evans. “The impact was immediate and touched every corner of this country — from a vaccine distribution program that counts more than 200 million Americans receiving a life-saving shot, to the Child Tax Credit that is the most impactful poverty relief program since the 1960s. Leadership matters and with President Biden and the Democratic Congress we are helping the people, not the powerful. And we’re not done. With an infrastructure package in the works, along with the Build Back Better agenda, this Democratic Congress is working every day to help make the lives of all Americans better and more secure.”

American Federation of Teachers President Randi Weingarten, who’s become a political lightning rod over her union’s handling of COVID-19 and efforts to keep classrooms closed, backed Biden’s infrastructure plans. “The Build Back Better agenda puts real resources and policies behind helping everyday Americans thrive – investing in the important things that help us create better lives, like safe, quality public schools, decent jobs with paid leave and other benefits, affordable, accessible childcare, and rebuilding and renewing our country’s infrastructure — be it roads and bridges, long-term care, or sustainable climate initiatives,” “As we travel the country, it’s clear people are relieved to see President Biden deliver on the promise of recovery with working people and our families at the heart of our economy.”

Polls show Biden’s approval has taken a hit in the wake of his handling of Afghanistan. A new Pew Research poll released Tuesday found just six percent of Americans rate his performance on Afghanistan as excellent. More than 40 percent declared it poor.

In the new Morning Consult poll, the share of Democrats who “strongly” approve of Biden has fallen seven points since the Taliban took control of Kabul, to 47 percent–the lowest of his presidency.

Still, Pennsylvania Democrats feel optimistic about their prospects and believe Biden’s multi-trillion-dollar spending plans will be popular in the Keystone State.

“It’s an honor to join this esteemed group to highlight once again what so many Pennsylvanians have felt since the start of Joe Biden’s presidency: Democrats at every level are delivering,” said Pennsylvania Democratic Party Chairwoman Nancy Patton Mills. “Despite unprecedented obstruction from Republicans in Congress, President Biden’s Build Back Better agenda is getting checks into pockets and helping small businesses reopen across Pennsylvania. From providing needed relief to local communities, to delivering a middle-class tax cut to working parents, the American Rescue Plan has been crucial to Pennsylvania’s recovery.”