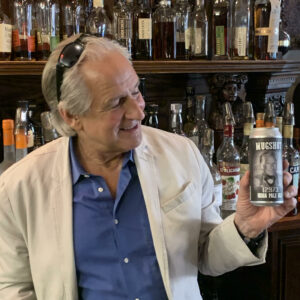 The dramatic fall and redemption life story of Philadelphia-born mobster George Martorano is the subject of the new documentary, “Life Without Parole.”

On September 20, 1984, Martorano was sentenced to life in prison without the possibility of parole, a practically unheard of sentence for a first-time, nonviolent offender. Local filmmakers Jill Frechie and John Ricciutti of Main Line TV sat down with Delaware Valley Journal to discuss their upcoming film, about Martorano’s life. Its trailer received a Telly Award in May.

Martorano, who also spoke with DVJournal, grew up in Philadelphia on what was nicknamed “Gunman’s Road.” Born with an entrepreneurial mind, he came from a family of business owners and always had an eye for how to make a fast–but illegal–buck.

He got involved with marijuana in his teens, but didn’t really get into the business of selling marijuana until he was an adult. However, that only lasted for three years before he was arrested and sent to prison when caught with a truckload of weed.

Although he had no criminal history, not even a parking ticket, his lawyer presented him a plea deal, telling him his sentence would be significantly lighter if he admitted to certain charges. Unfortunately for Martorano,  a judge handed down one of the harshest sentences possible for a nonviolent offender: life without parole.

When asked what drew them to Martorano’s story, Ricciutti said, “In December of 2019, I met George through a forensic and fashion photographer…He introduced me to him and he said, ‘John, you have a very interesting story here.’ And Jill [Frechie] was finishing up the project on [the opioid crisis in] Kensington and I told Jill about this guy, George Martorano, the son of made man Raymond ‘Long John’ Martorano, and I said I think this is worthy of a story.

“So I talked to George for a period of time and I listened to his story,” said Ricciutti, a Villanova resident. “And then Jill and I dove into it. And Jill being the researcher that she is, started to dig up things on George. We went from there. We found it to be a fascinating story that he is the only person in the judicial system, as far as I know, and as far as Jill knows, who ever got a life sentence without parole for marijuana. And that was the driving force.”

Frechie and Ricciutti discovered Raymond Martorano’s reputation and connections to the Philadelphia mob bled into George Martorano’s case. Ricciutti mentioned Martorano’s situation as being “biblical in a sense that he is suffering for the sins of his father. [Martorano] paid dearly for those sins.”

The process of developing “Life Without Parole” didn’t come easily for the filmmakers. 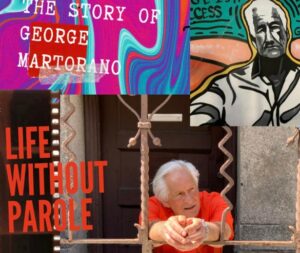 “In the beginning, we didn’t really know where we were going to go with this because there was so much of his story about how it could have happened and there were so many theories,” said Frechie, a Gladwyne resident who teaches film at Montgomery County Community College. “So, we just sort of started chipping away at the judge and his lawyer, and then we started to develop a broader picture of what life was like in the 80s and how the prosecutor, the lawyers, the judges were vying for power, for money, how Atlantic City took a huge role in the mob and the infiltration of violence into the mob scene and drugs.

“In the mob, you weren’t allowed to do drugs,” she said. “If you got caught with drugs, it was the death penalty. So, the fact that [Martorano] just dealt with marijuana, I don’t know how they thought about that but his dad was a big P2P [meth making chemicals] dealer and methamphetamines and that was all on the down-low. Once [law enforcement] got George, I think they just wanted him to rat out on everybody. They were so frustrated that they couldn’t put [the mob] away. It was an injustice because they took out their frustrations on George.”

Even Martorano couldn’t understand why the justice system was singling him out.

“They thought I had the secrets of the Philly mob. I don’t know. I was just the weed guy,” he said.

While many people were willing to talk to filmmakers about Martorano’s case, others refused for fear of reprisals.

“Former police, former prosecutors wouldn’t talk to us,” said Frechie. “We had a lot of obstacles around this situation that made us feel like there was something wrong here.”

Criminal justice and prison reform are two things that Frechie, Ricciutti, and Martorano hope to address through releasing Martorano’s story. They also want to remind people that inmates are still human even though they are incarcerated. Martorano had a record of helping other prisoners.

“Andrea Foulkes, the prosecutor and the woman who eventually got him out, said that anything that George ever did in prison, he did it to help other people. He didn’t do it for himself,” Ricciutti said.

And Martorano rehabilitated himself without any hopes of getting out of prison. After serving 32 years, Martorano is a free man and ironically, he owns a legal marijuana business.

“George and I are the same age so I put myself in his position, having blanked out 32 years of my life and thought to myself I would’ve just wanted to die,” said Ricciutti. “What’s amazing about George is how he turned his life around.”

Martorano, however, never gave up hope.

While still in custody, Martorano also prevented an aircraft from being hijacked by other prisoners as it traveled from Philadelphia to Oklahoma. He taught classes to other inmates, including writing, and has written extensively about his experiences. While an inmate, Martorano wrote some 31 books, short stories, screenplays, and poems.

“I graduated over 8,000 inmate students in my classes. That was never done before in the world,” he said.

The penitentiary permitted him to design and create his own classes and curriculum.