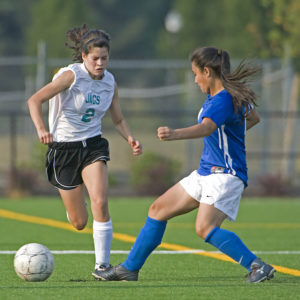 Another set of Olympic Games will take place this summer. We will cheer on those that run, jump, skip, slide, dive, swim, swirl and twirl, and marvel at performances that are as good as gold. The Olympics are one of our few examples to show us that people can put differences aside and come together.  But there is still one glaring and unequivocal divide: We separate the men from the women in sport.

I think it’s time we question why elite athletes in non-contact sports are divided for competition. In everyday life, we see the antiquated divisions between men and women in valuing performance breaking down. We are at a remarkable time of erasing the male/female divide for performance capabilities. The blanked separation has come down in where we work and socialize and in our homes; then why do we allow it to continue where we play?

While women have always played a significant role in the workplace, they have encroached to all occupations from astronaut to welder. Why should sports be any different? Women are becoming more visible in politics, and there are women leading countries. A striking change in some countries’ militaries allow women to join even the combat and specialty units, such as submarines. Domestic roles in many countries are no longer bifurcated.

Naturally, we all understand there are anatomical differences between men and women. However, when comparing abilities, especially at the elite sport level, we are talking about matters of degree of performance, not matters of principle in gender. For example, a 6-foot-6-inch person (male or female) would easily outperform at 5-foot-5-inch person (male or female) in dunking a basketball—all other things being equal. The reason is simply a matter of degree of performance capability not a matter of principle of being male or female.

In the Summer Olympics, is there a sex difference in principle for how one performs in archery, badminton, table tennis, canoeing, sailing, diving, equestrian, or fencing? The list could go on! Why do we insist that men and women continue to compete separately in such events?

One could argue that socio-cultural constructs have historically favored men in certain sports. But arguments that some have a cultural advantage over others in sport is strictly circumstantial. For example, the notion that those from a particular race or ethnic group “are not good at” such and such a sport has been discredited time after time and in sport after sport.

Even if socio-cultural forces are strong for some sports in a point in time, have we not advanced enough to look past stereotypes? Let’s take a close look at the real gender segregation in sport.

It appears that the arguments for separate competition for men and women in sports are a contradiction to the “no significant difference” rationale that has allowed women to erase dividing lines in society. If we continue this practice in sport, then all women’s performances will have the shadow of a large asterisk, i.e. “She won in the women’s event.” If we continue to divide ourselves in sport, then we are saying, if only tacitly: “separate but equal is just fine with us.”

We are succeeding in not dividing men and women for where and what they do at home at work and during social hours. Let’s add play and sport to this.  In the future, we should be wishing elite athletes well with, “May the best person win!”

Stephen F. Gambescia is professor of health services administration at Drexel University in Philadelphia. He wrote this for InsideSources.com.