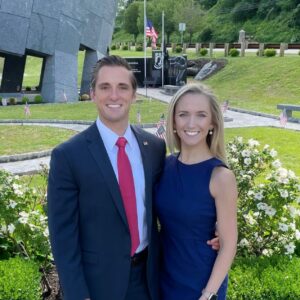 Galluch On Board For Delco Congressional Race

Although he’s never run for elected office before, Galluch, 31, a Newtown Square resident, says he believes he’s the right person for the job.

Galluch, a Republican, grew up in Buffalo, New York. His mother raised him by herself after his father was killed by a drunk driver before his birth. After finishing the U.S. Naval Academy at Annapolis in 2012, where he graduated sixth in his class, Galluch earned a master’s degree in economic development at Cambridge University. He was selected for the Navy Explosive Ordinance Disposal, a special operations job in the Navy. He served in the Middle East and Somalia where he was assigned to Seal Team Four.

He left the military in August 2019 to spend more time with his wife, Caroline, and now works for Comcast in its strategic development business unit. The couple met in Washington, D.C. where she was working.

“I was up in Washington for a weekend before my first deployment and we met there,” he recalled.

Galluch and his wife moved to the area to be nearer to her family in Hockessin, Del. Caroline now works as an administrative assistant at Episcopal Academy, as well as starting an interior design and home-staging business. His mom is also moving to Pennsylvania, he said, so she can be nearby when they start a family.

“I may not have been born here, but I’ll die here,” said Galluch.

Galluch is the first Republican candidate to file the paperwork for the election.

“I really enjoy it. It’s exhilarating,” he said about parachuting to the ground.

“I originally wanted to do a special operations community because of the high caliber of the folks in it,” he said. “A lot of my enlisted sailors, most of them were older than me, most of them had college degrees. You would walk into a room and there would be E4s and E3s, who were fairly junior sailors, who were former investment bankers, electrical engineers, folks like that who just decided they were sick of sitting in a cubicle and thought they would take apart bombs for a living.”

“I joined the community for that reason, and also being able to defeat the primary weapon of our enemy at that time, which was the improvised explosive device (IED),” Galluch explained. During the Iraq War and in Afghanistan, “terrorist organizations used those devices. I wanted to be in the thick of the fight.”

If he wins the GOP primary, Galluch will take the fight to incumbent U.S. Rep. Mary Gay Scanlon (D-Delaware Co.).

“My mom’s example was really my first and still the primary motivation of wanting to serve other people,” said Galluch. “She raised me by herself. She never worked less than two jobs. I remember her struggling to defy the odds to model leadership for me and to understand no matter what adversity you face in life you continually try to pay it forward by helping other people.”

Asked to comment about Galluch, Tom McGarrigle, GOP chairman for Delaware County, declined, saying that he’s focused on the 2021 election at the moment.

But Galluch said his concerns about the state of the country propelled him to run for office.

“A colleague of mine (Senior Chief Scott Cooper Dayton), was killed in Syria in 2016,” Galluch said. “And I remember being at his funeral, being in a line of sailors that seemed a half mile long to pay our respects to him…Fast forward to the summer of 2020 and I’m watching the country in chaos, the streets ablaze, I remember an American flag get burned outside a burning police station and the failure of our elected leaders to come together in a bipartisan way to do what needed to be done to quell the violence, to quell the unrest, to restraint to urge common sense in the face of crisis led me to believe that folks like my friend that died, they served not to get rich, not to aggrandize, but to serve a country that they loved.”

Galluch said because of his working class roots, he can serve Delaware County residents better than the incumbent who, he notes, ran as a moderate but votes for a leftwing policies, including on immigration.

For example, it would be common sense for the immigration system to be tied to the needs of the labor market, he pointed out.

“Running for office means having the humility to work with people who don’t agree with,” said Galluch. “But it also means having the courage to stand up for what you believe in and for what the average voter believes in.”

“If your politics are not in line with the politics in that district, then you’re doing something wrong,” he said. “I think having youth in today’s politics is important, and an advantage not being beholden to tried approaches…is absolutely essential. I don’t like the fact that Democrats and the left get to have a monopoly on the words ‘hope and change’ because as conservatives we can offer hope and we can certainly offer change. “