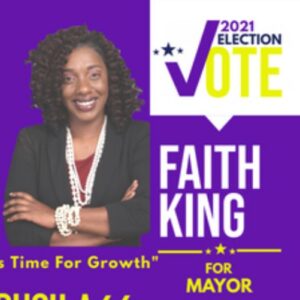 A former staffer for U.S. Rep. Mary Gay Scanlon and former candidate for mayor of Trainer stands at the center of a mystery surrounding thousands of missing dollars from the Chichester football booster club, according to a document obtained by Broad + Liberty.

The Chichester School District sent a letter last Friday to Delaware County District Attorney Jack Stollsteimer, asking his office to investigate Faith King for her role as “bank signatory” for the football booster’s club from December 2021 to July 2022. The letter says $12,000 went missing from the club’s accounts during that time.

King’s attorney denied any wrongdoing by his client.

“In discussing the issues addressed in your email with my client, Ms. King would respectfully respond that she performed her duties responsibly, ethically, and with fidelity to the booster club at all times,” King’s attorney, James Gallagher said. “All finances were appropriately handled, and accounts were provided as needed. Ms. King categorically denies any allegations that she misappropriated, embezzled, or otherwise used booster club funds in any illicit or unethical way.”

King was the Democratic nominee for mayor of Trainer in 2021, a borough of just under 2,000 people in Delaware County. She lost to Republican Marilyn Maher by a wide 62-37 margin.

According to quarterly expense reports published by the U.S. House of Representatives, King first appeared on Scanlon’s payroll in the second quarter of 2021. She was still listed on the congresswoman’s payroll in the most recently published expense report which covered the second quarter of 2022, employed as Scanlon’s Pennsylvania-based scheduler and outreach coordinator.

“Ms. King is no longer employed by Congresswoman Scanlon’s office,” said Carina Figliuzzi, spokeswoman for Scanlon. “The inquiry sent to the Congresswoman’s office today [by Broad + Liberty] is the first time she and her staff have been made aware of this situation or any similar accusations against Ms. King.”

Scanlon’s office did not mention when King was dismissed, or give any reasons behind her departure.

The letter from the school district to Stollsteimer goes in-depth on the district’s numerous attempts to try to get to the bottom of the issue, but claims that King stopped cooperating.

“For the past three months, the School Board has attempted to obtain information from Ms. King about the whereabouts of the disputed funds as well as an accounting of the transactions during the time that she was bank signatory,” the district’s letter to Stollsteimer said.

King does not appear to have been charged with any crime at the moment, and is presumed innocent until proven guilty. And the district stopped short of making a full allegation against her in its letter to law enforcement.

“While the school board hopes that nothing fraudulent or untoward has occurred, the School Board needs answers about these funds,” the letter said.

A request for comment to the Delaware County District Attorney’s office was not returned.