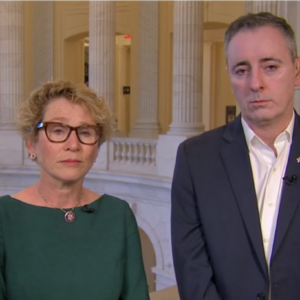 Democrat Rep. Chrissy Houlahan and Republican Rep. Brian Fitzpatrick are on opposite sides of the partisan aisle, but they are in full agreement when it comes to Ukraine and its President Volodymyr Zelenskyy: Give them what they need.

That was the message of the two Delaware Valley members of Congress when they appeared on “Fox and Friends” Wednesday morning in advance of Zelenskyy’s speech to Congress.

“We should give Zelenskyy what he’s asking for,” Fitzpatrick said.

Houlahan said it is the job of Congress to “ask questions and push for answers” from the White House when it comes to providing material support to Ukraine. “The administration is where the buck stops.”

Fitzpatrick was more direct in his criticism of the Biden administration’s Ukraine policy, particularly its refusal to participate in the transfer of MiG-29 fighter jets from Poland to the embattled nation’s military.

“It’s inconsistent to say on the one hand, ‘They [the Ukrainians] don’t need them,’ and on the other hand to say, ‘It’s provocative for us to give them,'” Fitzpatrick said. “I don’t understand the distinction between lethal equipment like Javelins and Stinger missiles being driven across the border… It’s a distinction without a difference. We should give Zelenskyy what he’s asking for, which is the ability to knock these missiles that are causing such incredible devastation out of the sky.”

In his speech to Congress later that morning, Zelenskyy renewed his request for the fighter jets, as well as his call for western nations to impose a no-fly zone in the skies over Ukraine.

“I have a need. I need to protect our sky. I need your decision, your help, which means exactly the same… when you hear the words, ‘I have a dream,'” he said.

“Remember September the 11th, a terrible day in 2001 when evil tried to turn your cities, independent territories on battlefields, when innocent people were attacked from air, yes, just like no one else expected it, you could not stop it. Our country experiences the same thing every day, right now at this moment, every night for three weeks now various Ukrainian cities — Mariupol and Kharkiv — Russia has turned the Ukrainian skies into a source of death for thousands of people,” Zelenskyy said.

Few in Congress or the White House are prepared to take that step, however, and neither representative gave the idea their support.

“I hope we will continue to be as creative in our solutions as possible,” Houlahan said. “They are in a fight for their lives and we should be as helpful as we possibly can.”

Both members are also in agreement on extending sanctions to Chinese banks as well, as part of the pushback against Russia. “I think that our partnership with China will still allow us to maintain the cooperation that we have achieved, and not only maintain, but also increase it in an environment where Western markets are closing,” Russian Finance Minister Anton Siluanov said Sunday. There are also reports Russia asked China for armed drones on the eve of its invasion of Ukraine.

“We need to keep China on the sidelines as much as possible,” Houlahan said. She also expressed disappointment over news India may take up a Russian offer to buy crude oil and other commodities at a discount.

“I’m frankly confounded by India and this particular set of circumstances, and their movements right now have been a little bit perplexing, to be honest,” she said.

Fitzpatrick recently traveled to the Ukraine border and he described the conditions there as “heartbreaking.”

“Watching the men staying behind to fight for their country saying goodbye to their spouses, their wives, their moms, their daughters — it’s one of the most heartbreaking things I’ve ever seen.”

Houlahan’s father was born in Lviv when it was part of Poland, “So certainly it’s personal to me. And it should be, frankly, personal to all of us. Because it’s reflective of 1939 and that should concern all of is,” she said.